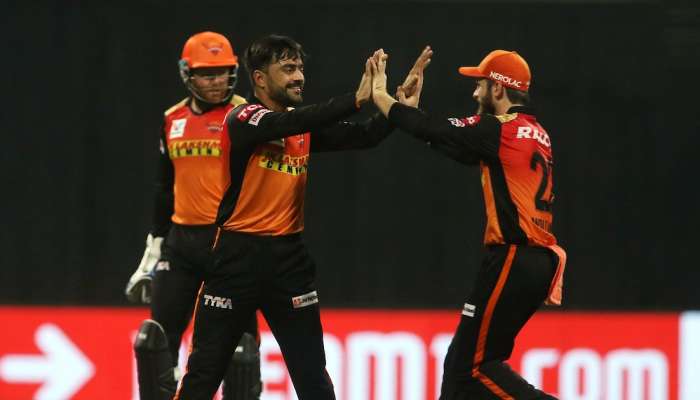 Rashid took three key wickets of Shikhar Dhawan, Shreyas Iyer, and Rishabh Pant to hand SRH their first win of the tournament. Chasing 163 runs, DC got off to a worst possible start with opener Prithvi Shaw back in the dugout in the very first over.

The early wicket slowed the innings as Dhawan and Iyer played less risky shots in the powerplay. Iyer scored 17 runs off 21 balls before Rashid dismissed him in the eight over.

Rishabh Pant then joined Dhawan in the middle and the duo formed a paltry 20 run stand before Rashid spun the web again. The left-handed Dhawan scored 34 runs off 31 balls as Delhi reeled at 62/3.

Shimron Hetmyer stitched a 42 run stand with Pant. Hetmyer got out in the 16th over in order to control the mounting run rate. In the very next over, Pant too departed after scoring 28 runs.

Marcus Stoinis too failed to leave a mark and scored just 11 runs. Delhi kept losing wickets in the death overs and eventually fell 15 runs short of the target.

Earlier after being asked to bat first, SRH got off to a brilliant start as both openers, David Warner and Jonny Bairstow, struck regular boundaries.

The duo took the team over the 50-run mark in the seventh over. They formed a massive 77-run partnership before Amit Mishra dismissed Warner (45) in the 10th over.

Manish Pandey then came out to bat but failed to leave a mark after Mishra scalped his wicket.

Pandey's dismissal brought Kane Williamson on the field and he, along with Bairstow, took the team over the 100-run mark in the 14th over.

Bairstow went on to complete his half-century in the 18th over but in the same over, Kagiso Rabada got hold of him, ending the batsman's 53-run innings.

Rabada then bowled the last over and picked the wicket of Williamson, who gave away an easy catch to Axar Patel after scoring 41 runs off 26 balls. His stunning performance helped DC restrict SRH to a decent total.