Qualification not linked to wages, say experts in Oman 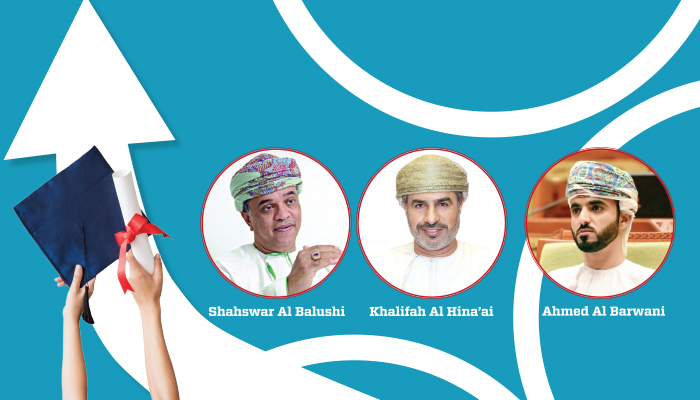 Muscat: A competency-based pay structure that rewards how well employees perform at the workplace should be in place, rather than rewarding them on the basis of their qualifications, experts told the Times of Oman.

This comes after the Undersecretary for Labour at the Ministry of Labour announced on Tuesday that wages would no longer be linked with qualifications.

“Providing more job opportunities to Omanis currently looking for work in the country was one of the main reasons behind the decision to no longer equate an employee’s salary to his qualifications,” the Undersecretary for Labour at the Ministry of Labour has said.

However, Omanis employed in the country will still be eligible for the minimum wage of OMR325 a month, irrespective of the nature of their job. This decision was made on 22 September.

In his interview with Al Shabiba, the sister Arabic publication of the Times of Oman, he said, “The majority of jobseekers registered with the Ministry hold bachelor’s degrees and diplomas. Therefore, linking wages to their qualifications would not facilitate their employment. Most jobs offered by the various sectors require prior experience from jobseekers.”

He also urged jobseekers to opt for the jobs that were currently available in their sectors of expertise, as compared to waiting for the jobs that are expected to be filled under the expatriate replacement programme set up by the Ministry of Labour. This would help reduce the number of locals currently seeking work in the country.

“We aim to provide immediate job opportunities to a big number of jobseekers,” said Al Hosni. “Among the objectives of the ministry comes regulating the labour market, which drove us to the decision of replacing expatriate manpower with the national workforce. There are changes to come in this replacement scheme, employment policies and changes in the procedures of how the various sectors in the country should operate.”

As part of these changes, in principle, Omani nationals will receive priority for jobs. To ensure they remain competitive, job seekers need to gain experience and add to their skills. The ministry is also working to bridge gaps in employee retirement policies, which vary across the different sectors.

Shahswar Al Balushi, the head of Oman’s Tanfeedh Labour Labs, said the decision was made to increase competition for jobs among Omanis, encourage locals to increase their skills, and equate their working conditions with those of expats who did the same roles they were assigned.

“Earlier, when firms used to register an Omani national with a bachelor’s  degree who had agreed upon a salary of OMR450, the ministry would say he couldn’t be registered at that salary, as he needed to earn a minimum of OMR600,” he said.

“The company would argue that the Omani had already fixed this salary, but the ministry would respond that because he had a bachelor’s degree, he had to be paid OMR600.”

“Now, the Ministry is to act as a regulator to ensure Omanis are paid a fair minimum wage,” added Al Balushi. “It is for the Omani to ensure and fight for the right wage. For example, if a company can only pay OMR 1,000 in salary, but the employee wants OMR1,500, then he must have the capability to request that salary. But the company must also pay him a fair salary: you cannot offer someone with a master’s degree a salary of OMR350.”

The decision to match a citizen’s salary to his qualifications, said Al Balushi, was instituted so that Omanis could receive a fair wage. However, he added that companies around the world rewarded employees not just because of their education, but on the basis of their performance and skills.

“When companies used to hire an expat, and offer him more salary than an Omani for doing the same job, the Omani would complain, on the grounds that both had the same qualifications,” he recalled.

“He did not take into account that the expat had seven or eight years’ more experience and was therefore compensated accordingly. Now, Omanis will be paid according to their performance levels and skills at the workplace.

“This is the way all companies around the world reward their workers, through the system of a meritocracy,” he said.

“That being said, in Oman, if a company does not reward its workers accordingly, be they Omani or expat, then they will leave, and go to another company. This is also a great opportunity for Omanis to improve their own abilities, in the form of short courses and supplementary learning that enhances their existing skills.”

Al Balushi also felt this new salary structure needed to be reflected in the Omanisation policies adopted by companies. “In the construction sector, the Omanisation rate is currently 30 percent,” he said.

“But how much of a percentage of the salaries in that sector goes to Omanis, compared to expats. Instead of looking at the number of Omanis employed in a particular sector, one must also look at the salary distribution among locals employed there.”

Adding to this, Ahmed Al Barwani, a former member of the Shura Council and former vice chairman of the its Youth and Human Resources Committee, who also serves as the vice president of the Omani Bar Association and is a former member of the National Committee for Human Rights, said, “In my field of specialisation, law, I was, and still am, a firm believer that skill, competence, and practical experience are more important than academic qualification, such as masters degrees and doctorates. You sometimes find people with higher educational qualifications in law who do not know how to even write a legal notice, or do not know the difference between the law and its regulation.”

“I finished in the top places among my fellow bachelor’s degree graduates at Sultan Qaboos University, and I started my career with a very small salary of OMR 100  in 2004, and then I received OMR 200 for a period of two years. But now, I own a law office in Shatti Al Qurum, in Bawshar.”

He said, “Job seekers must be willing to work at any salary for the sake of experience, which is better than sitting at home and waiting for a job for years.  They can join a job to gain experience and develop their capabilities and then graduate to a better job with a higher salary. This is the reason for success among many of the residents in our country. Some of them don’t even have a degree, but they work and gain experience and competence. This has led to them earning a high salary and occupying a prominent position. They were patient and willing to learn and gain experience.”

“Parents have to teach their children that certificates are for knowledge in the specialisation that their son or daughter desires, but when it comes to work, the experience and competence that he acquires while training and working in his field of specialization will determine his salary, not just his education,” he added.

Lawyer Khalifa Al Hinai said, “The decision to cancel linking wages to qualifications and establishing a minimum wage of OMR 325 for all is a wise one, and its usefulness will soon be proven.  Competence will impose itself, and competition will help in practical capabilities.

“The private sector does not recognize the certificate a person bears, but rather the amount he provides for the benefit of the institution,” he added.

“Therefore, the pursuit of skill development will be more effective than simply holding degrees. Encourage people to pursue the job they are skilled in, so that our  youth don’t remain suspicious of the issue of employment and salary.  The state’s interest lies in the presence of a strong private sector, on the principle that the labour sector is governed by the regulations of the contract, rather than the law. The state had previously experimented with setting wages, but this proved unsustainable.”

Al Hinai went on to say, “This decision will reduce the number of excuses put forth by companies for not employing citizens. The state can now confront them when they seek to evade reasons behind not appointing citizens, with many of them claiming this is because of the higher cost linked to them. It actually costs more to bring on labour from outside the Sultanate.”

“Conversely, the Ministry of Labour should raise the rates of Omanisation in the private sector, and in no way can it be lenient or exclude companies from implementing this. The success of any decision cannot be achieved unless there is a strong basis to implement it. This is a roadmap to help solve the country’s employment problem,” he said.