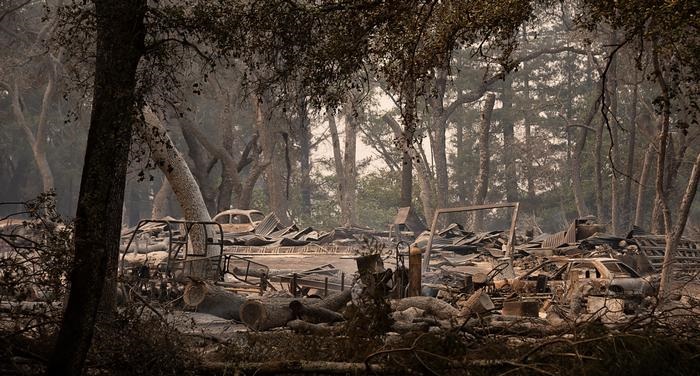 Three people died in a new wildfire fanned by fierce winds in northern California on Monday.

Since mid-August, 29 people have been killed in the California wildfires. More than 7,000 homes and other buildings have been destroyed in the state this year.

The Zogg Fire erupted on Sunday near the town of Redding and has already charred about 31,000 acres. It is expected to merge with the historic 880,000-acre August Complex fire.

It coincided with another blaze, named the Glass Fire, about 320 kilometers (200 miles) to the south, in the heart of northern California's wine country. That fire forced tens of thousands to evacuate their homes in the world-famous Napa and Sonoma regions.

The Glass Fire consumed Napa vineyards and devastated buildings in the region. It has spread at a "dangerous rate" through 36,000 acres, said CalFire.

Communities in Napa and Sonoma face another devastating inferno even as they are still reeling from wildfires in 2017, when 44 people died and thousands of homes were destroyed.

More than 35,000 residents have been ordered to evacuate and thousands are likely to flee as the fires burn through dry vegetation and mountainous terrain, officials said.

Both the Glass Fire and the Zogg Fire have been listed as zero percent contained, and were spread further north on Monday by strong winds of up to 55 mph (88.5 kph). The cause of each fire is being investigated.

Winds will "stabilize overnight, which should help with our efforts to take advantage of those conditions," said California governor Gavin Newsom.

More than 1,000 firefighters tried to bring the conflagrations under control, the governor said.

Wildfires in California have been of historic proportions this year. Since January, the blazes have scorched a record 3.7 million acres (1.5 million hectares).

The fires have been stoked by intense, prolonged bouts of heat, high winds and other weather extremes which scientists attribute to climate change.