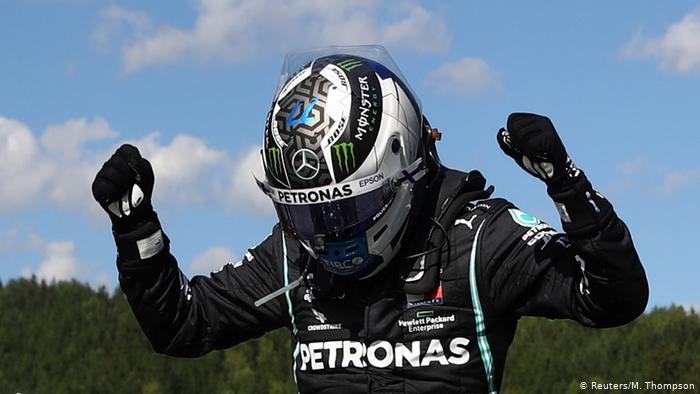 Nurburg: Mercedes' Valtteri Bottas ended teammate Lewis Hamilton's run of five consecutive Formula One pole positions by claiming first place in the qualifying at the Eifel Grand Prix on Saturday.
Red Bull's Max Verstappen secured his near-traditional P3 slot on the grid, but just 0.037s off Hamilton. Ferrari recovered a little ground after a miserable run of races, with Charles Leclerc qualifying fourth and Sebastian Vettel 11th.
Red Bull's Alex Albon finished in P5 while Daniel Ricciardo took sixth for Renault. Rounding out the top 10 came the second Renault of Esteban Ocon in P7, with the McLarens of Lando Norris and Carlos Sainz eighth and 10th, sandwiching Sergio Perez in the second Racing Point - the Mexican taking P9 on his first qualifying session in the updated RP20.
Unsurprisingly, Nico Hulkenberg made a dash for the track when the pit exit light showed green at the start of Q1, Racing Point's super-sub keen to get back up to speed with the RP20 vacated by an ill Lance Stroll - Hulkenberg having been confirmed to drive in the hour leading up to qualifying.
Hamilton will have to overtake his teammate on Sunday if he has to match Michael Schumacher's record of 91 wins in F1.