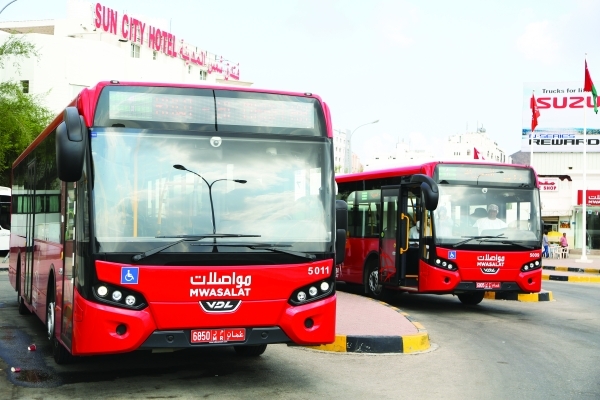 Muscat: New routes will be launched in the coming months to enhance the public transportation system in Oman, a senior official from Mwasalat said. “The company will launch its Al Khoudh route, which will connect the Sultan Qaboos University and the Burj Al Sahwa Roundabout, in July and a number of buses to Sohar and Nizwa will also be increased during the Holy Month of Ramadan,” Salim bin Mohammed Al Nuaimi, undersecretary, Ministry of Transport and Communications for Transport, said.
Al Nuaimi, who is also the Board Chairman of Mwasalat, said eight buses will be operated between Sohar and Muscat and five buses between Muscat and Nizwa. “The company will increase the number of buses to Salalah during the Khareef season,” he added.
Commenting on the progress in A’Duqm, he said the company is taking the help of specialists from the Special Economic Zone Authority of Duqm (SEZAD) to assess the transportation requirements of the region.
“A new Muscat-Duqm Route (one bus every day) will start operating in the third quarter of this year, and the number of buses could be increased after the evaluation of the first phase,” Al Nuaimi revealed. Speaking about the current routes, Al Nuaimi said the Ruwi-Al Amerat route, which was recently launched, is a successful route and there is a demand to increase the length of this route to include the Al Nahdha Neighbourhood, as the average number of passengers on the route is 850 passengers a day.
He added that the same applies to the new Ruwi-Muttrah, Al Alam Palace route, which was inaugurated on April 24 as more than 500 passengers use the route every day.
He explained that the number of buses that are used on the routes in the Governorate of Muscat is 28 and these will go up to 36 after the launch of the Al Khoudh Route. The company is also operating 28 buses on the inter-city routes.
Al Nuaimi added that the company has a fleet of approximately 400 buses for schools and Sultan Qaboos University contracts. In response to a question about linking the governorates, he said that currently the governorates are linked to the Governorate of Muscat and there is a plan to increase the number of trips from Muscat to the governorates, stressing that there is an ongoing study for inter-city services to link the governorates and major cities.
Al Nuaimi also said that the strategic plan of the company for the next two decades has been completed now and will be disclosed in October. According to him, the master plan includes three main objectives.
“Firstly, it will determine the basic requirements to provide public bus services in detail beginning from Muscat, and then in the rest of the cities and regions of the Sultanate and the routes that can be operated outside the Sultanate,” Al Nuaimi said. He added that it will also include details of an integrated financial plan for its implementation, as well as determine the future requirements for the modernisation of the necessary infrastructure.
He added that the strategy includes the developmental aspects of trying to find an integrated public system to serve all segments of society, to reach the concept of public transport, to achieve the highest growth rates in accordance with the quality standards followed with respect to mass transport and in order to reduce traffic congestion, enhance the economic and social benefits through the implementation of the public transport system and to revitalise the commercial and tourism activity and the associated services.
He added that the strategy is being implemented through the purchase of new buses that will support this sector and there are plans that will be announced in the second half of this year with respect to Muscat and the rest of the governorates.
He also explained that nearly 1.1 million passengers were using buses until the end of March this year and since the start of operations of the company with its new identity inside Muscat on November 22, 2015, it had been drawing 9,000 passengers a day.
Al Nuaimi added negotiations with some banks and investment companies in coordination with the Ministry of Finance are continuing to implement programmes and plans for the company, which would reduce government support in the current period.