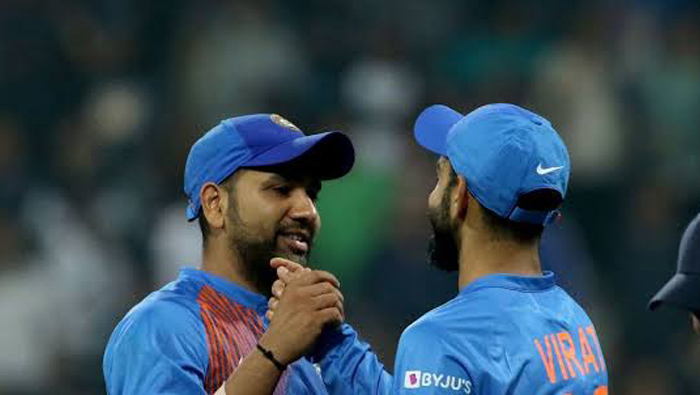 Vizag: A host of records fell on Wednesday as India recorded a comprehensive 107-run win over West Indies in the second ODI at Vizag.

The hosts put up an imposing total of 387/5, with a monumental opening partnership of 227 between KL Rahul and Rohit Sharma getting them there.

Rohit’s 159 saw him rack up his seventh ODI century this year; only Sachin Tendulkar has hit more in a calendar year, leading the way with nine in 1998. The century also took Rohit’s international tally of tons this year to 10.

Rahul was the first wicket to fall, dismissed by Alzarri Joseph shortly after reaching his third ODI century. Captain Virat Kohli endured a rare failure, falling to Kieron Pollard for a golden duck, but Shreyas Iyer and Rishabh Pant were able to put on quite the show after Rohit departed.

Pant’s 39 came from just 16 balls, while Iyer hit four sixes from Roston Chase’s fifth over, with the off-spinner deposited for 31 runs in total from that set of six. Although Pant was dismissed the next over, the pair’s partnership of 73 took up just 24 balls. The damage was severe; Jason Holder was the only bowler to go at under a run a ball in the innings.

Evin Lewis and Shai Hope safely took West Indies through the first 10 overs of the chase before Shardul Thakur made the opening breakthrough, removing Lewis for 30.

Shimron Hetmyer and Chase departed in quick succession, but some hope was sparked by a 106-run partnership between Nicolas Pooran and Hope. However, Mohammed Shami intervened with two wickets in two balls to put West Indies in further bother.

Shami wasn’t able to nab his second hat-trick of the year, but Kuldeep Yadav was in the mood. The wrist-spinner dismissed Hope, Holder and Joseph in consecutive deliveries.

Keemo Paul offered some resistance with a 42-ball 46, but his wicket brought an end to a thumping victory.