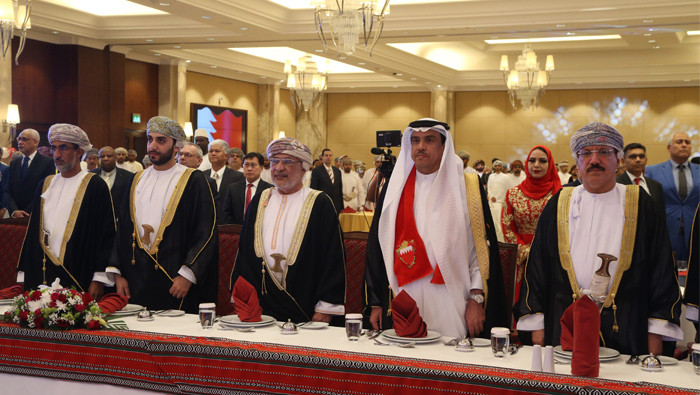 Muscat: Dr Juma bin Ahmed Al Kaabi, Bahrain’s Ambassador to the Sultanate stressed on the depth of Omani-Bahraini historic and civilisational relations, thanks to the Royal Directives of His Majesty Sultan Qaboos bin Said and King Hamad bin Isa Al Khalifa of Bahrain, noting that it is a well-established model for relations that are based on what links the two brotherly people with strong historical ties, and bonds of love and kinship.
He said in a speech on the occasion of the celebration of the National Day of Bahrain, “In the framework of developing joint cooperation between the two countries, we are keen, in coordination with the concerned authorities in the Sultanate, to follow up the implementation of the recommendations of the Bahraini-Omani Joint Higher Committee, which was held in September 2018 and included all areas of political, security, economic, trade, industrial, cultural, tourism, educational and other fields of cooperation that meet the aspirations of the two people.”
The ceremony was attended by a number of their highnesses, ministers, honourable members of the State Council, undersecretaries, members of Majlis Al Shura, a number of heads of diplomatic missions accredited to the Sultanate and some officials from the Foreign Ministry