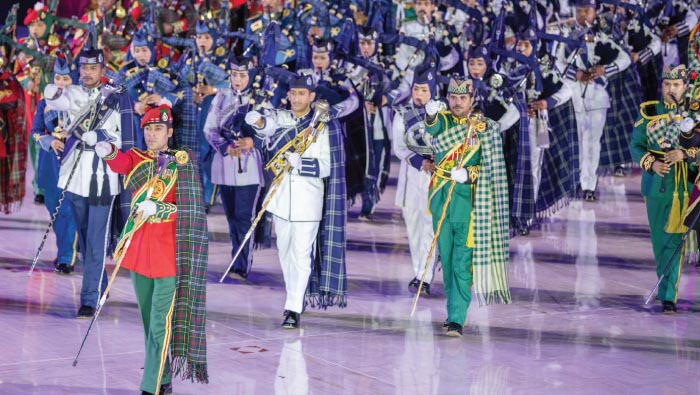 Muscat: Marking the 49th National Day of Oman celebrations the Royal Opera House Muscat (ROHM) presented a military concert under the patronage of H.E. Sayyid Khalid bin Hilal Al Busaidi, Minister of the Diwan of the Royal Court.
The final day of ROHM’s spectacular military music concert takes place tomorrow as part of the celebrations of the 49th National Day of Oman.
In a proud display of military pageantry, hundreds of men and women in the bands of the Royal Guard, the Royal Oman Police, Oman’s Royal Army, Navy and Air Force, and the Combined Group of the Royal Cavalry and Camel Band will march in formation on ROHM’s outdoor courtyard while playing classic military music in colourful uniforms.
Heart-stirring experience
It is a heart-stirring experience to witness the flawless military precision of the tattoo, to hear the evocative sound of bagpipes and the royal call of trumpets while sharing heartfelt patriotism with thousands of others. In an expression of friendship symbolising Oman’s global outlook, musicians and performers from Mexico will enrich the concert and open more windows on the world.
The Banda Manumental de Mexico will perform a dazzling demonstration of their musical and cultural heritage creating a visual feast for spectators and offering a tantalising glimpse into the vibrant and dramatic character of the Mexican people and their beautiful country.
ROHM’s annual Military Music concert, which began on Tuesday will conclude on Thursday. The event is being held at 7:00pm, outdoors on ROHM’s Maidan. This is a ticketed General Admission (OMR3) event with unreserved seating. For further information and booking, please consult the ROHM website at www.rohmuscat.org.om.