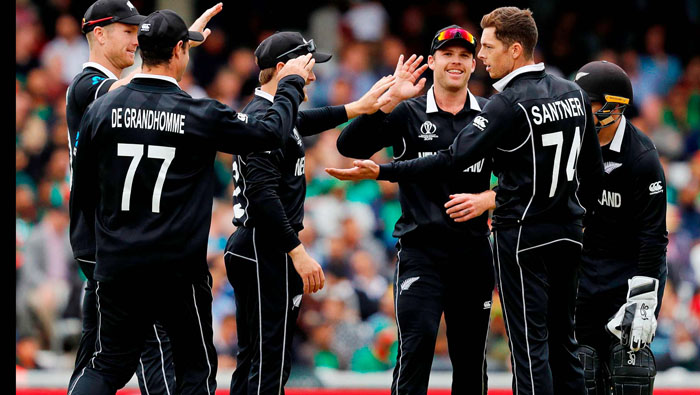 Pallekele: A 79-run stand between Ross Taylor and Colin de Grandhomme, coupled with a strong bowling performance from Tim Southee, helped New Zealand claim a five-wicket victory over Sri Lanka in the first of three Twenty20 internationals at Pallekele.

Lasith Malinga, the home skipper, elected to bat first on Monday, 2 September. The two Kusals, Mendis and Perera, opened the batting and got off to a fine start, adding 41 for the first wicket inside the first four and a half overs. Perera was the first wicket to fall with stand-in New Zealand captain Southee breaking the stand.

Avishka Fernando, the next batsman in, couldn’t make a meaningful contribution and was stumped by Tim Seifert off Mitchell Santner. The loss of Fernando resulted in the most profitable partnership for Sri Lanka, with Mendis and Niroshan Dickwella adding 63 in five overs. Mendis top-scored for the hosts with a fine 79, including eight fours and two sixes.

The back-end of the Sri Lankan innings saw quick-fire cameos from Dasun Shanaka (17* off 12 balls) and Isuru Udana (15* off three balls), which helped the hosts finish on 174/4. Southee was the pick of the bowlers, returning 2/20 from his four overs.

New Zealand got off to the worst possible start in the chase, as Lasith Malinga bowled Colin Munro for a golden duck. The wicket was Malinga’s 98th in T20I’s, making him the joint leading wicket-taker in men's T20 internationals alongside Shahid Afridi.

Two more wickets fell inside the first eight overs as debutant Wanindu Hasaranga struck in his first over. This bought together Taylor and de Grandhomme, and they built a foundation for the chase with a 79-run stand.

Malinga, however, struck off the third ball of his second spell, bowling de Grandhomme with one of his trademark yorkers, and thus becoming the leading wicket-taker in T20I history.

Taylor, however, started cramping later in his innings and was trapped lbw by Hasaranga for 48. The batsman reviewed to no avail, and as his dismissal was confirmed, the game was halted due to rain.

Play resumed with no overs lost, with New Zealand requiring 31 runs from 19 balls. Daryl Mitchell (25*) and Mitchell Santner (14*) then collaborated to see the visitors to victory with three balls to spare.