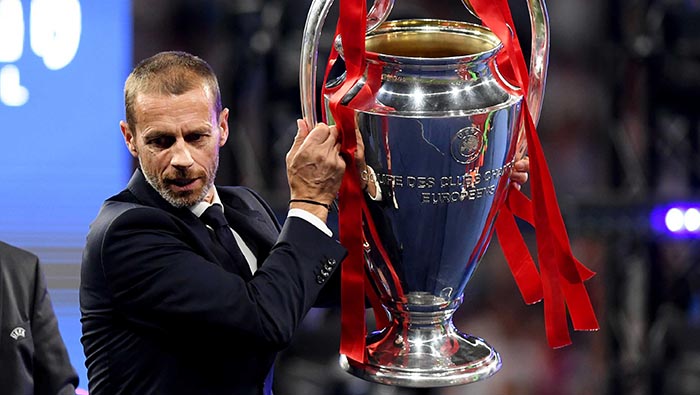 London: UEFA president Aleksander Ceferin is ready to postpone until next year any decision on reform of the European competitions amid continuing disagreement among the clubs.
The European Federation has to come up with a new formula for the 2024-27 window in good time to negotiate contracts with broadcasters and sponsors. Everyone – UEFA, clubs, leagues – knows that change is inevitable but the likelihood is that Ceferin will emerge with his own preferred version because of disagreement among the other stakeholders.
A potentially significant summit between all three had been set up for next month but this has been postponed by Ceferin after the 246-member European Club Association failed to come up with an agreed negotiating approach.
The ECA was created as an independent body, at the instigation of former UEFA president Michel Platini, to dilute the power and influence of a cabal of major clubs such as Real Madrid, Barcelona, Juventus, Manchester United etc.
Clubs split
The strategy has worked with increasing success as ECA increased in numbers with the accession to membership of more and more clubs from medium-size and small federations. Giants from the Big Five leagues – England, France, Germany, Italy and Spain – want a greater slice of the Champions League’s financial pie and guarantees of perpetual access but their ambitions have been stymied by smaller clubs which want more of the largesse trickling down in their direction.
Europe’s leagues, meanwhile, remain determined to block any attempt by the clubs to persuade UEFA to stage any rounds of an expanded Champions League on the weekends which are traditionally blocked off for domestic competition.
Ceferin, with no consensus from across the table insight, thus postponed further talks and threw the onus on the clubs, in particular, to reach some sort of agreement among themselves. A letter to both clubs and leagues said: At the beginning of June I called for a joint meeting of your respective Boards with the UEFA Executive Committee on 11 September 2019 to pursue the discussions started earlier this year on the future of European club competitions. We are currently in the process of gathering feedback from our national associations and I feel – more generally – that a new discussion now would be premature as we are analysing feedback and proposals coming from different parties. At the same time, as you know very well, UEFA deliberately kicked off the review process for the 2024-27 competition cycle much ahead of our regular schedule and we are therefore in no hurry. We do not, in any case, expect to make a decision this year. For the above-mentioned reasons, I have decided to postpone the meeting of 11 September. I will send a new invitation as soon as I think that we are ready for a meaningful discussion. Clearly Ceferin’s diplomatic use of “we” might be read as meaning “you.”
Talking time The ECA had no option but to accept with its delegates to the UEFA executive committee, chairman Andrea Agnelli and Nasser Al-Khelaifi, doubtless grateful for more time. Both men are in awkward positions since, outside ECA, they head two of richest clubs in Europe respectively in Italian and French champions Juventus and Paris Saint-Germain.
An ECA statement, issued after an executive board meeting in Liverpool, said: The executive board [has] reviewed and discussed the feedback received to date. This will be analysed further over the coming weeks, but our members have made clear that the current structure of UEFA club competitions is not serving the interests of the majority of clubs, particularly those outside of the largest domestic competitions. ECA’s priority in the next phase of the consultation process is to work with stakeholders across football to find the best route for reform. This will begin with further presentations on consultation feedback and subsequent discussions at the next ECA General Assembly in Geneva on September 9-10.
The board, therefore, welcomes the UEFA president’s decision to postpone the meeting between UEFA, ECA and the European Leagues originally scheduled for September 11. ECA is committed to being a constructive part of UEFA’s reform consultation and will continue to represent the interests of all of its members in this process.