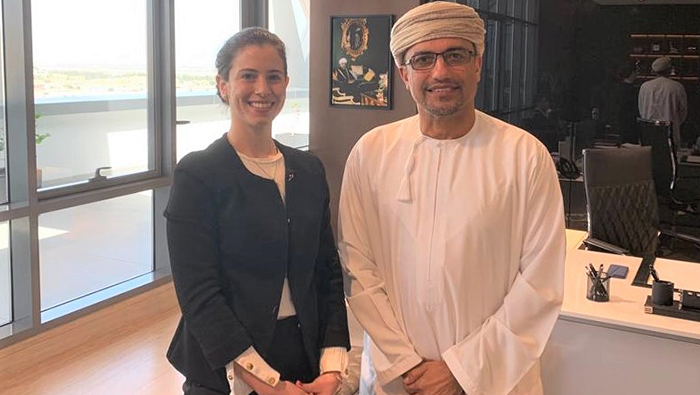 Muscat: A new report by the global research and advisory firm Oxford Business Group (OBG) will map out the latest developments in Oman’s privatisation efforts and drive to attract investment for the non-oil sectors of its economy, such as transport and logistics, tourism and mining.
Oman International Development and Investment Company (Ominvest) has signed a partnership agreement with OBG for its forthcoming publication. Under the agreement, the publicly-owned investment holding company will help to produce the Capital Markets Chapter of The Report: Oman 2020 and other content that will be made available across OBG’s platforms.
The Report: Oman 2020 will look in detail at the legislative and regulatory reforms that have been introduced to enhance the Sultanate’s business climate for investors. Key topics to be analysed include the recently announced Commercial Companies Law, which is expected to be pivotal in attracting foreign direct investment (FDI) to Oman.
OBG will also shine a spotlight on Oman Vision 2040, the guiding document that will act as the reference point for the country’s economic diversification efforts in the coming years, including the development of several national implementation programmes.
Abdulaziz Al Balushi, Group CEO said he was delighted to be teaming up with OBG once again for its report on Oman’s economic development and investment opportunities, adding that the publication’s timing was significant on many levels.
“Building a strong partnership between the government and the private sector is extremely important for economic growth as recent major enhancements in the new Commercial Companies Law have exemplified,” he said. “The government’s efforts to improve the ease of doing business will not only make the Omani economy more competitive but will also make the country more open and attractive to foreign investors. Further changes will improve the business environment for FDI and make our economy even more vibrant and diversified.”
Welcoming Ominvest on board, Jana Treeck, OBG’s Managing Director for the Middle East, agreed that the Sultanate’s bid to position itself as an attractive destination for FDI was gathering pace.
“Oman has taken major strides forward in recent months by laying the legislative groundwork needed to steer the country towards a sustainable, knowledge-based economy,” Treeck said. “The national drive to bring the sovereign wealth funds centre stage and inject more liquidity into the economy has a key role to play in these plans. I’m thrilled that our readers will benefit from the insight and in-depth analysis that the experts at Ominvest will once again provide on these and other topical issues in our coverage of Oman’s Capital Markets.”
Commenting after the partnership signing, Naiade Freitas, OBG’s Country Director for Oman, said that the agreement would help in undoubtedly providing the readers with the most up-to-date information regarding foreign direct investment opportunities as well as accurate financial sector analysis.
"Oman has already made several reforms in 2019 to make the business environment more friendly, for example through the enhancement of public-private partnerships (PPPs), privatisation, and foreign capital investments," Freitas added. ”This partnership with Ominvest exemplifies this momentum and we are very excited for them to be our capital markets partner once again.”
The Report: Oman 2020 will mark the culmination of more than 12 months of field research by a team of analysts from Oxford Business Group. It will be a vital guide to the many facets of the country, including its macroeconomics, infrastructure, banking and other sectoral developments. OBG’s publication will also contain contributions from leading representatives across the public and private sectors.
The Report: Oman 2020 will be produced with Ominvest, Ithraa, and the Oman Chamber of Commerce and Industry. It will be available online and in print.