Half a billion invested in fisheries projects 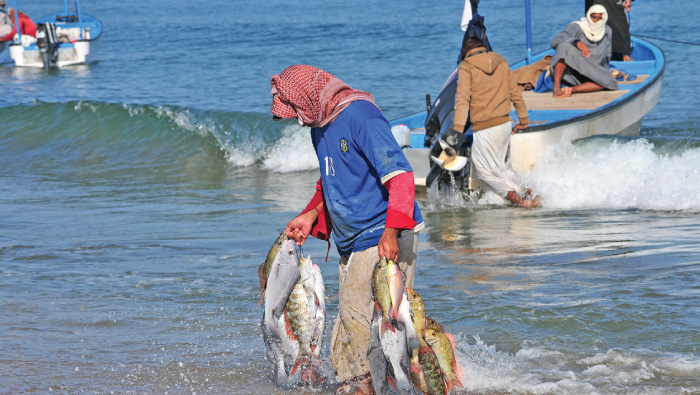 Muscat: Work is continuing on 10 fishery projects in Oman that have seen investments of nearly half a billion rials, as the country moves to become more self-sufficient in terms of food security.
The 10 projects have been listed in the annual report of the government’s Implementation, Support and Follow-up Unit (ISFU), which oversees the nation’s Tanfeedh programme for economic expansion.
A total of OMR487.2 million has been earmarked for these 10 projects, which will involve the setting up of aquaculture farms where marine animals can be fed and raised for food, some of which will be exported to other markets. Of these projects, five are shrimp farms and two involve abalone farming, while a fish hatchery, algae cultivation and a recirculating aquaculture system (RAS) are also under development.
“Fishing, and the vital industries associated with it, plays an important role in Oman’s economy and shows massive potential opportunities for the future,” said the ISFU. “The sector also received considerable support from the government who recognises it as a pillar of economic development due to its renewable sources, especially with the activation of a scientific management system of these”.
Agriculture and fisheries have been earmarked as one of the key areas of expansion under the government’s Tanfeedh programme, which aims to move the Sultanate away from oil-and-gas based sources of income. Four other areas of high potential have been targeted, namely tourism, mining and energy, transport and logistics, and manufacturing.
ISFU added: “The fisheries sector initiatives are divided into subsectors: catch (traditional and commercial), aquaculture, processing products and growing exports. In terms of classification for contribution to GDP, fisheries are intertwined with agriculture to maintain a global standard. Oman is ranked first in all GCC countries for fisheries and agriculture contributions to GDP with a total of 2.1 per cent.
ISFU said: “Oman boasts great economic potential from the sector due to its long coastline, multiple sites for commercial aquaculture projects and availability of supporting infrastructure such as ports, roads and logistics networks. Global demand is estimated to increase to 40 million additional tons of fish products by 2025 and, based on the biodiversity in the Sultanate’s waters, the fisheries sector in Oman has witnessed a paradigm shift over the course of 2011 to 2016. There was a higher increase in growth than planned of the total fisheries volume and value of production, contribution to the GDP and other key performance indicators in 2018.”
With the exception of the Bustan hatcheries project, which is located in the capital, Muscat, the other nine projects are spread across the country. The Bustan hatcheries project will produce up to 40 million juvenile fish every year and will see OMR 11 million invested into the project.
Once fully set up, the five shrimp projects are expected to provide about 71,200 tonnes of shrimp per year. Of these, Al Jazer farm in Al Wusta, with an investment of OMR59.5 million has been designed to provide 17,600 tonnes, while Quron and Khuwaima shrimp farms, with investments of OMR14.2 million and 11.3 million, located in South Sharqiyah, will provide outputs of 3,600 and 3,000 tonnes each.
Bar Al Hikman farm in Al Wusta is a massive complex that will see investments of up to OMR150 million, and after being set up, will deliver 43,000 tonnes of Indian white shrimp. Bentout farm in Al Wusta will deliver 4,000 tonnes of tiger shrimp against an investment of OMR16.4 million.
Two abalone farms are being set up in the southern Dhofar Governorate. Mirbat farm, which will cost OMR 5.7 million, will see a delivery of 200 tonnes of abalone, while Sharbathat farm will produce a further 450 tonnes after OMR5.6 million in investment.
In addition, a recirculating aquaculture system in Quriyat is being set up with Norwegian company AquaSite to produce up to 20,000 tonnes of salmon every year, while British company FeedAlgae will jointly contribute towards an algae farm in Sharqiyah, which is expected to produce 100,000 tonnes of algae a year.
ISFU said, “RAS is a closed system that has a controlled environment. It has many benefits over other aquaculture types, including lower water consumption and reduced risk of diseases whilst maintaining a high standard of fish quality.”
Commenting on the development of Oman’s investment towards food security, Arvind Venkataraman, the project engineer for Al Arfan Farms, said: “Chicken, dairy and fish form the backbone of any food requirement of a society, and in the past, the biggest concern the country has faced has been imports of these items, as well as overfishing. The government is trying to control fishing so that the ecology does not get destroyed as a result of overfishing”