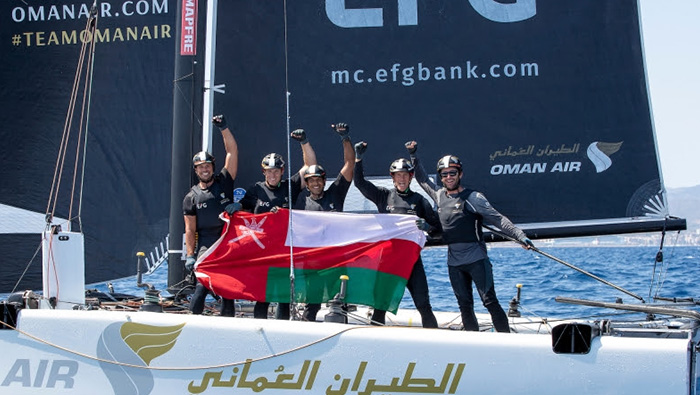 There were smiles and cheers all round as the crew received their trophy at a spectacular prize-giving for the Copa Del Rey MAPFRE regatta in the Mallorcan capital presided over by King Felipe VI of Spain.

The crew produced a memorable display of highly competitive sailing as they won half of the regatta’s 20 races over four intense days on the Bay of Palma, and finished in the top three in every single one.

After sharing the lead at the end of the opening day Team Oman Air then moved ahead of the chasing pack with a hat-trick of race wins on the second day.

In what had developed into a head-to-head tussle with their Swiss adversaries on Alinghi, skipper Adam Minoprio and Nasser Al Mashari, Stewart Dodson, Pete Greenhalgh and Adam Piggott held a three point lead going into the final day and then sealed the deal with victories in the two last races to take the win by a clear five points.

Along with their victory in the opening round of the GC32 Racing Tour in Sardinia, the Team Oman Air crew are now firmly on course to realise their ambition of winning the 2019 Tour title in what is Oman Sail’s 10th anniversary year.

“It was a great day on the water today for Team Oman Air,” said Minoprio. “We managed to get three seconds and two firsts with some very close racing with Alinghi. We put some points on them and were able to extend our lead to win the regatta, a fantastic day.

“It’s been a great week of racing with some very, very close racing with Alinghi, but the team’s done a great job and we have been very consistent and managed to be on the podium in every race and win half the races, so a very, very good week.”

And he added: “Over half the way through the season and we have got ourselves into a good spot with Alinghi for the overall championship with two events left – there’s going to be some great racing to come.”

Overall Team Oman Air – which is also supported by EFG Private Bank Monaco – now lead the Tour by virtue of their Palma victory, though level on points with Alinghi.

Long-standing team member Al Mashari says the hard work is paying off: “We have worked very hard at getting good communication and good boat handling on the water, and on teamwork as well, that was our goal and it worked and we won.

“It has been great in Palma with very good conditions, and we won the event so we are happy. We are looking forward to the next event in Lake Garda and we will try and do even better.”

Greenhalgh, Oman Air’s tactician and mainsail trimmer, agrees: “We are super happy and proud. It’s a great feeling to be on top of the leaderboard with Alinghi behind us.

“The team have worked so hard, everybody, the people behind the scenes, to get us to where we are now, so it’s a big ‘thank you’ to all of them, and let’s keep it going and push hard to the end.”
The crew can now look forward to the penultimate round of the GC32 Racing Tour on Lake Garda, Italy, in September.