Most rewarding three years of my life: Pakistan Ambassador 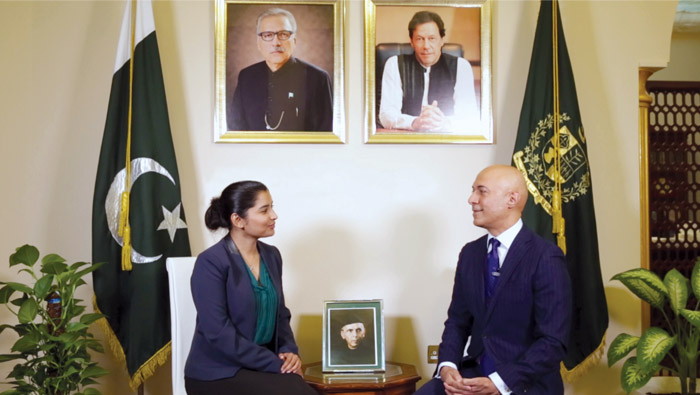 Muscat: Ali Javed, Pakistan’s Ambassador to the Sultanate bids adieu after completing his tenure of three years on a very positive note.
The ambassador, who will be leaving the country this week, explained why his time here has been memorable.
In an exclusive interview with Times of Oman, the Pakistani ambassador said: “As I leave the Sultanate today, I leave with good memories. Professionally and personally, I think it has been the most rewarding three years of my life.”
“I would leave only one message to the citizens of Pakistan that are residing here. I would like to tell them that the leadership of Oman, at all levels , appreciates their very great human contribution to building Omani civil society and institutions. I would like nothing to change and want to see our people continue with their famous fervour to serve this special relationship that we have with Oman.”
He continued: “I can put my hand on my heart and say with deep satisfaction that the enormous support which I received from the Pakistanis in Oman stretches from Buraimi to Salalah. At all times, I was able to achieve the goals that we have set for ourselves and we actually improved on many other aspects of bilateral relations, so I am extremely satisfied.”
Speaking about some of his initiatives, including WhatsApp Broadcast which keeps the Pakistani community in Oman up to date with all that is happening, the ambassador said: “I wanted to connect with all Pakistanis in Oman and I took it upon myself to make sure that there were no barriers and that we are able to establish complete transparency, and work efficiently.”
“Now to achieve all these targets, I thought that the best way would be to connect with them through WhatsApp as it is the most commonly used app on hand-held phones – not everyone manages Twitter or Instagram. It was challenging in the beginning because as we started adding people, we became aware that it was taking us six hours to send us one simple press release with a picture to our subscribers.”
“Now I can say that it is the only mission of Pakistan anywhere in the world and the only embassy of any country in Oman that manages its WhatsApp broadcast and we have the trust of 20,000 voluntary subscribers who are following us on WhatsApp.”
The ambassador of Pakistan added that he is pleased with the way matters have progressed between the two countries during his tenure in Oman.
“I am grateful to God Almighty for bestowing upon me this greatest honour to serve my people as their servant and as the ambassador of Pakistan to the Sultanate of Oman. I think in a country of 210 million people, for any person, man or woman, to achieve this distinction of serving as the ambassador in itself is great. However, when I arrived in Oman, I started from inside out and outside in, I didn’t work with one group but worked concurrently with all three tiers of Pakistanis in Oman as well as the government of Oman in Pakistan.”
“Very quickly, I realised that the response was overwhelming and therefore, as I leave today, I am very pleased with the way things have progressed. The foreign ministers of the two countries are now the Chairman of the Joint Economic Commission which is a great achievement. We have signed Memorandum of Understandings (MoUs) for cooperation between the parliaments, National Defence and universities, and we are close to finalising other significant MoUs that would further augment our relationship,” Ali Javed said.