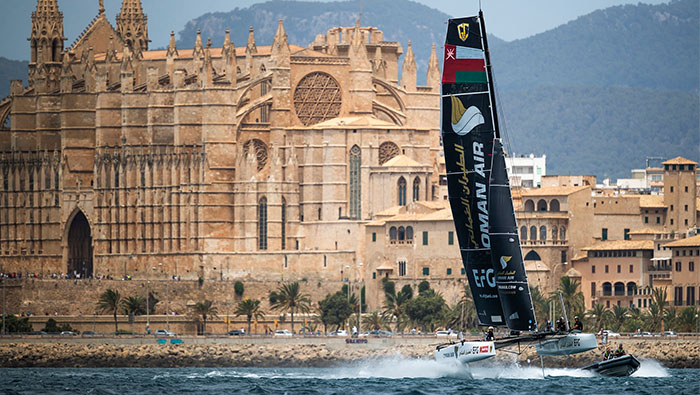 Muscat: Team Oman Air are joint leaders after the first day of a windy Copa Del Rey MAPFRE as they pursue their season-long target of the 2019 GC32 Racing Tour title.

Racing for the first time at Spain’s biggest sailing event in Palma, Majorca, the Oman Air crew made a winning start with two race victories and a succession of podium places to share top spot on the leaderboard level on points with their long-standing Swiss adversaries on Alinghi.

Also taking a share of the podium spots was another familiar rival in the form of the Austrian Red Bull Sailing Team, with French entry Zoulou also getting in on the act with a second place in the fourth of the opening day’s five races.

“It went pretty well for us and we got a couple of wins, so we are certainly at the front of the fleet,” said Oman Air tactician Peter Greenhalgh who races alongside skipper Adam Minoprio and crewmates Nasser Al Mashari, Stewart Dodson and Adam Piggott.

“It was very gusty in some pretty tricky conditions and the front three or four boats were very, very tightly racing. So we were wrestling with Alinghi, Red Bull and Zoulou, and it was really close.

“There were a couple of things we didn’t get right, but overall we are happy. We will work on what we can control and go out and smash it tomorrow. We just have to keep chipping away and do what we are good at, and at the end of the week we know we will be there.”

Team Oman Air – which is also supported by EFG Private Bank Monaco – have three more days of racing to come in Palma and the outcome is likely to remain in doubt until Saturday, but the team know a win in Spain would put them back on track for the Tour title in what is Oman Sail’s 10th anniversary year.

Long-standing team member Al Mashari says the crew is fully focused: “It was a very good day on the water, with some good, strong wind. We enjoyed it and we felt comfortable. Tomorrow is a new day, and we will go out and try and get first and seconds again.

“We started the series very well when we won in Villasimius. We know we can do it again and will do as much as we can to get there. Our ultimate goal is to win the GC32 series.

Racing for the GC32 fleet of high-speed foiling catamarans resumes Thursday and continues until Saturday. Team Oman Air are aiming to be on the top step of the podium at a prize-giving presided over by King Felipe VI of Spain.