Achieving His Majesty the Sultan’s goals through the State Council 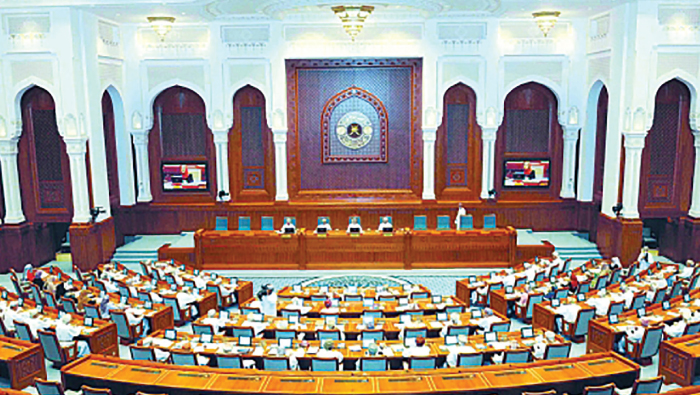 Muscat: Dr Khalid bin Salim Al Saidi, Secretary-General of the State Council, has confirmed that, since the initiation of the Blessed Renaissance 49 years ago, His Majesty Sultan Qaboos bin Said has resolutely enabled the strengthening of the pillars of national unity to make it the mainstay of the development endeavours and the springboard for national progress.
Al Saidi said in a statement : “His Majesty has worked arduously to establish the pillars of the state institutions and law, to uphold its spirit, consolidate the values of justice, equality, security and create an atmosphere of peace and tolerance in the nation.”
Shura is one of the pillars of the state institutions from the outset of renaissance and it has evolved confidently, achieving noble goals guided by His Majesty’s wise vision.
Al Saidi added that the move to involve citizens in decision-making has led to the significant development of Shura, strengthening institutional practice and integrating them in the process of achieving development goals and national progress. In addition, the evolution of Shura resulted in the adoption of the bicameral system, which includes the State Council and Majlis Al Shura under the umbrella of the Council of Oman.
“Since its establishment two decades back, the State Council has been an active partner of Shura, having to its credit substantial achievements, work and activities. It plays a vital role in national development through the exercise of its functions, powers and terms of reference as an effective legislative and supervisory institution.”
“As the seventh term approaches, the Council looks forward with immense aspirations to augment its contribution to national work within the framework of state institutions and law and in the context of integration with other state entities,” Al Saidi said.
He then took pleasure in reviewing the most noteworthy draft laws, proposals and studies discussed and approved by the Council during the fourth annual session, including the draft laws discussed by the Council and referred to it by the Council of Ministers.
These included draft laws regulating the practice of medical profession, statistics and information as well as the activity of companies and private institutions working in the field of urgent mail to the GCC State. Draft laws of bankruptcy, foreign capital investment, privatization and public and private sectors were also considered as well as laws discussed by the Council and proposed by Majlis Al Shura. Draft amendments to some articles of the Tender Board Law, patient rights and safety and the draft law of wastewater management and treatment also came under consideration.
Al Saidi stated that, from the proposals and studies submitted by Council committees, it approved 12 and referred them to the Council of Ministers namely: the proposals “Protection of children from accidents”; “Language policies of the Sultanate, its realities, challenges and mechanisms for development”; “the role of Omani drama in society ; “development of the training system aligned with education” as well as the proposal “the reality of the services provided by sports clubs and ways to use them to serve the community”.
In addition, the proposals “integration of the standard of living and productivity”, “organising advertising”, and the “Framework and Determinants of the Public Debt Law” were also sent to the Council of Ministers, as well as the law to regulate the uses of biotechnology and its products and the protection of genetic data in Oman, and the studies “Promotion of mineral wealth” and “Review of land laws of Oman”.
The Secretary-General stated that the Sixth term (2015-2019) of the Council was intensively active and the discussions focussed on more than twenty new or amended draft laws referred by the Council of Ministers, seven proposed projects from the Council of Oman, twenty-three proposals and studies performed by committees, in addition to four state budgets and the ninth five-year development plan.
Developing cooperation
The Secretary-General highlighted the council’s keenness to develop strong relations with other parliaments as it realises the value of fortifying cooperation and building bridges of communication with other countries.
During the fourth session, the Council received delegations from counterpart councils. They included delegations accompanying Dr. Muhammad Hidayat Nour Wahid, Vice Chairman of the People’s Consultative Assembly of Indonesia, Czech Senate President- Jaroslav Kubera, Lord Geoffrey James Dear, Deputy Speaker of the House of Lords and H.E. Muhammad Sadiq Sanjrani, Chairman of the Pakistan Senate.
The guests also included, the Atlantic Council delegation headed by Stephen John Hadley, former U.S. National Security Advisor and executive vice President of the Atlantic Council, David McAllister, Chairman of the Foreign Affairs Committee of the European Parliament, Gabriela Cuevas Barron, President of the Inter-Parliamentary Union(IPU) and a Senator from Polish Senate.
The Council also received delegations from more than forty schools, colleges and institutions during its fourth annual session of the sixth period. The Council also participated in the 140th Assembly of the Inter-Parliamentary Union (IPU) and its accompanying events, held in April in Doha. In addition, it took part in the World Conference of Women Parliamentarians in London and the World Youth Forum organised by the United Nations Economic and Social Council in New York.
Connect and Share
The Secretary General said that the Council has confirmed its enthusiasm for connecting with the people by organising seminars that address community issues and taking art in national events and exhibitions held in various provinces of Oman.
For example, the Council organised an open day for the Omani media and a meeting of editors of local newspapers and electronic news sites with the aim of strengthening cooperation, as the Council places high importance on the dissemination of authentic and appropriate information about its activities.
The Secretary-General concluded his statement by expressing his utmost thanks and gratitude for His Majesty’s generous patronage of the Shura which has yielded unprecedented development as can be seen in all areas of the Sultanate.