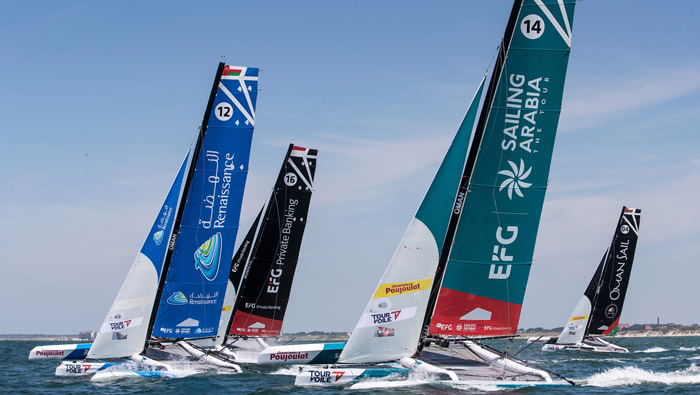 Muscat: The four Oman Sail crews taking part in the classic Tour Voile have shown they are each a force to be reckoned with in the first series of races.

Racing their Diam 24 trimarans against world class opposition at the start of the 17-day marathon around the French coast, the quartet produced some outstanding results during the three-day curtain raiser in Dunkerque which ended Sunday.

Among the highlights were an outright win in Saturday’s racing by the Renaissance Services entry followed by a second place on Sunday, and a first ever individual race victory by the all-Omani development crew on Team Oman Sail skippered by Akram Al Wahaibi.

Meanwhile the all-female crew racing EFG Sailing Arabia The Tour recorded a succession of competitive results in the 23-strong international fleet, and the experienced race team on EFG Private Bank Monaco posted a series of podium finishes to stay firmly in contention on the overall leaderboard. The strong performances came as Oman Sail aims to achieve a top-three podium finish in the Tour Voile to mark the 10th anniversary of being established.

Currently leading the way to that goal is the Renaissance Services crew of skipper Stevie Morrison, Quentin Ponroy and Abdul-Rahman Al Mashari, who moved up to a hard-fought third spot on the leaderboard at the end of racing in Dunkerque.

“It was tough at the beginning but we won the day yesterday and then we had two boats in the final – but the best thing for me today was seeing Akram win a race and the girls have been performing at a fantastic level,” said Morrison. “So for Oman Sail and our team of four boats it has been a great upward trend in the last three days – we can leave Dunkerque very happy.”

Nowhere in the Tour Voile fleet were the smiles bigger than among the race-winning Team Oman Sail crew of Al Wahaibi, Haitham Al Wahaibi, Raad Al Hadi and Yasser Al Rahbi. “It was hard racing today in very light winds at times and a strong current, but on the fifth race we had a good start and some good tactics and were able to win,” said skipper Akram Al Wahaibi.

“Being in front meant we had clear wind and a fast boat, and we now know that the Oman Sail teams can win anything.” The EFG Private Bank Monaco crew of skipper Pierre Pennec, Corentin Horeau and Hussein Al Jabri also improved over the opening three days and moved up the leaderboard to eighth place. The team had to contend with some damage which dropped them to last place in one race before they were able to recover and qualify for Sunday’s super-final.

“It is the first Tour Voile for this team but we have earned some points and we get better each day,” said Pennec. “The results are very close and now we have to get ready for the next venue in Fécamp, where it is likely we will have bigger waves and current.” Also looking forward to the next stop are the EFG Sailing Arabia The Tour squad of skipper Audrey Ogereau, Maelenn Lemaitre, Ibtisam Al Salmi, Marwa Al Kaifi and Tami Al Balushi.

“The opening Act was, depending on the day, both good and bad – the first two were good for us though the third was quite hard with some small mistakes which has left us feeling a little disappointed,” said Ogereau of their overall nineteenth place. “We are aiming and hoping to do better at the next venue – I believe we can do better and we know we have a lot to do.”

The demanding Tour Voile schedule resumes in Fécamp on Monday – the second of seven venues – with the first coastal race of the Tour.