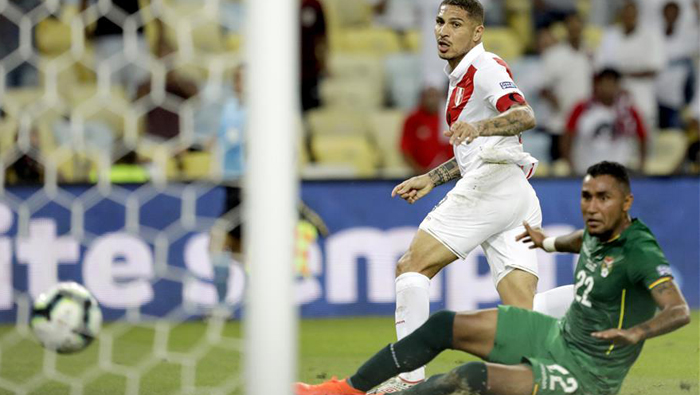 Rio De Janeiro: Peru came from behind to clinch a 3-1 win over Bolivia on Tuesday and keep alive their hopes of progressing to the Copa America knockout stage.

Former Wigan Athletic striker Marcelo Martins opened the scoring from the penalty spot at the Maracana stadium after Carlos Zambrano was deemed to have handled Fernando Saucedo's shot inside the box.

Peru captain Paolo Guerrero equalized on the stroke of halftime, calmly rounding goalkeeper Carlos Lampe after a counter-attack and slotting in a low finish.

The Blanquirroja dictated terms early in the second half and they took the lead in the 55th minute when Jefferson Farfan headed in Guerrero's floating cross from the left. Substitute Edison Flores put the result beyond doubt by sending the goalkeeper onto his backside with some fancy footwork before chipping a shot into an empty net in stoppage time.

La Verde have now failed to win in nine international outings and Tuesday's result makes it impossible for them to advance to the next stage of this tournament.
Peru, with four points from two matches so far, will make it out of their group if they win their next fixture against Brazil, but could also progress with a draw.