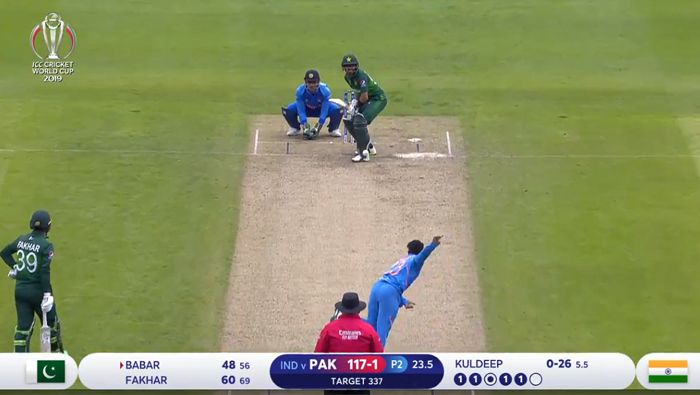 Manchester: Over an estimated billion people tuned in to see India-Pakistan Cricket World Cup match, according to the tournament’s organisers.

Over 750,000 ticket requests were made prior to the game at the 23,000-capacity Old Trafford cricket ground with an estimated billion people tuning in to watch the rivals’ clash at the World Cup.

Pakistan arrived at Old Trafford Sunday afternoon knowing they would have to put in a performance like the one they had put
in against England a week earlier if they were to have any chance of recording their first ever World Cup victory against India.

However, a majestic 140 of just 113 balls from Mumbai and Indian opener, Rohit Sharma at the top of the order soon put Pakistan on the back foot.

While fellow opener Lokesh Rahul made a steady 57 off 78 in support of Sharma. By the time captain Virat Kohli arrived at the
crease for the first wicket, India already had a 136 runs in the bank.

A swift 77 from 65 for Kohli took the game away from the Pakistan bowlers and despite a late flurry of wickets for paceman Mohammed Amir, Pakistan could only restrict India to 336. By the time Pakistan arrived at the crease for the second inning the weather had turned even more in favor of the Indian bowlers.

The sold out crowd looked towards the second innings expecting an exciting run chase, however the crowd never got to see the
innings they were expecting. Only six boundaries came off the first 10 overs and thanks to the tight, economical bowling of
Bumrah and Bhuvneshwar the required run rate for the Pakistanis had climbed to almost 7 an over.

Despite signs of resistance and the restart of a serious run chase from Fakhar Zaman who hit Pandya for a few wonderful boundaries, the loss of four wickets in three overs at the 24th put an end to any hopes Pakistan had.

Once the rain arrived, the slow Pakistan run rate was compounded as Duckworth-Lewis Method deemed that India had won by a clear margin of 89 runs after 40 overs.

After the game, Kohli heaped praise on the Sharma as well as the team effort, “Rohit’s knock was outstanding but to get to 330
you need a team effort and that is exactly what happened.”

For Pakistan, this loss means that only a miracle will save them if they are to qualify for the semifinals.