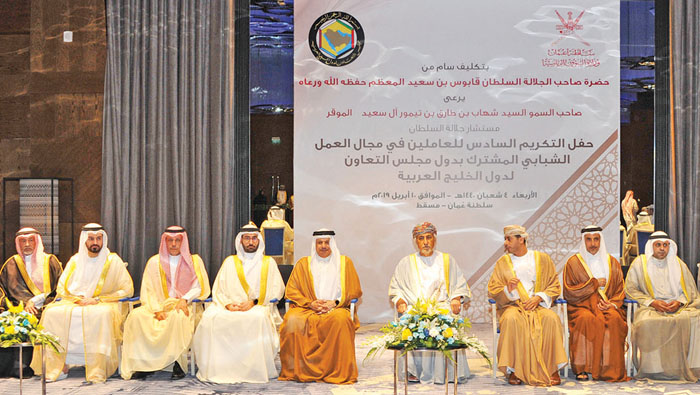 Muscat: Delegated by His Majesty Sultan Qaboos bin Said, His Highness Sayyid Shihab bin Tariq Al Said, Advisor to His Majesty the Sultan, presided over the sixth honouring ceremony for personnel in the field of joint youth work in the “public and juristic personalities” and “Creative Youth” categories.
This honouring, which has been annually conducted by the GCC countries on the sidelines of the meeting of Ministers of Youth and Sports, to encourage exerted efforts, which had an important impact and the great role in the achievements made in the GCC countries.
The honour is given to personalities who have made great domestic and external services to the youth and sports sectors in the GCC countries.
The honouring ceremony aimed to motivate the Gulf youth, highlight their creativity and encourage them to continue work and double efforts to reflect their high level of intellectual, cultural and sports creativity in various fields of youth work.
Sayyid Khalid bin Hamad Al Busaidi who was among the honoured public and juristic figures said, “I am very happy to have this honour, which undoubtedly comes from the GCC leaders and the ministers of youth and sports in the GCC countries for the importance of the role played by Gulf youth in the social and sports renaissance”.
On his part, Khalid bin Mohammed Al Zubair thanked the GCC Secretariat General for the kind gesture to all those who were honoured, including athletes and institutions, who had a role in promoting joint cooperation among the GCC countries on sports side. He added that sport also plays an important role in the rapprochement of peoples and civilisations.