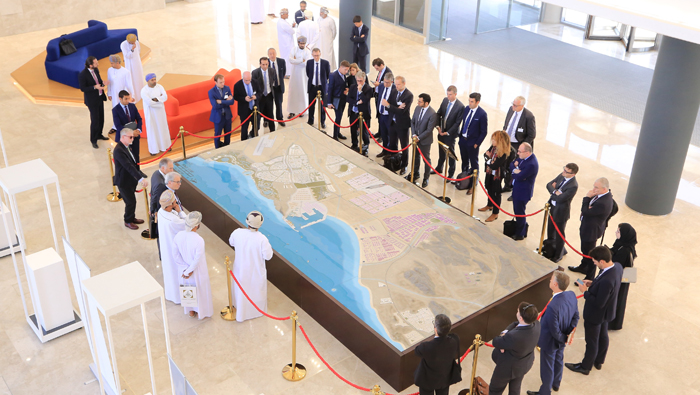 Muscat: A French business delegation headed by Frédéric Sanchez, head of the French Projects Association “Medef International” visited the SEZD to brief on the projects being established in the region and the available investment opportunities.
The visit came after the success of the visits exchanged since the beginning of last year between the Special Economic Zone Authority at Duqm (Sezad) and French companies, which resulted in the establishment of an alliance of five major French companies to study investment opportunities available at Duqm.
Frédéric Sanchez, the head of the French Projects Association expressed his admiration for the projects witnessed by him in the Special Economic Zone Duqm (SEZD) pointing out that the aim of the visit to the region is to attract French companies to the Sultanate in general and to Duqm in particular.
He added that the meetings made with the officials of the Sezad were successful.
He added that the visit allowed us to be aware of the region and its investment advantages, referring to the joint meetings between the Omani and French sides.
He pointed out that these meetings contribute to strengthening the economic relations between the two countries.
Opportunities
Frédéric Sanchez said that Duqm has many opportunities and possibilities that we can take part in its development. This is fantastic in the region where it has a clear vision of evolution and growth. It has various investment opportunities in the oil and gas sector.
"We have about 20 French companies that can benefit from business opportunities in this sector and partnerships with Omani companies. He added that this visit enabled us to meet with a number of Omani institutions in Muscat and to explore the possibility of expanding the business in the Sultanate in general" he added.
"In fact, the bilateral meetings were positive, and I think French investors will invest in the region," he further pointed out.
During the visit, the French business delegation toured the comprehensive area of the SEZD. It also visited the Oman Dry Dock Company, Port of Duqm, Duqm Refinery, Tourist Area and a number of other investment areas.
During the visit, presentations were made by the Sezad, the Public Authority for Investment Promotion & Export Development (Ithraa) - the Port of Duqm Company, the Oman Dry Dock Company, the Oman Oil Company and the Oman Wanfang LLC, which is developing the Omani industrial city in Duqm.