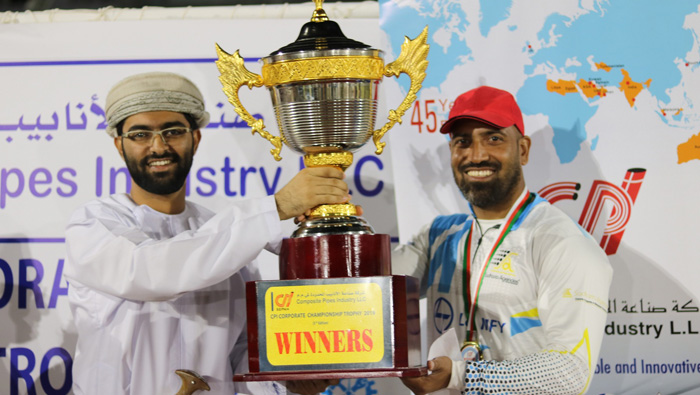 Muscat: L&T beat Al Nahda in the super over in the final to win the fifth CPI Corporate Championship Cup 2019 at Al Batina International School, Sohar.
A total of 19 teams had registered for this 1-day extravaganza. All matches were played on a knockout basis. Fancied teams like Shamel Plastic, L&T, Al Nahda and CPI, were the frontrunners to win the tournament.
In an enthralling final, L& T won the toss and elected to field. Al Nahda started on the backfoot losing its dashing opener Danish off the first ball. Hari Ganguly 24 runs in 15 balls and Bilal 28 not out in 12 balls fought hard and were well supported by Zia who scored an unbeaten 19 in 5 balls. The team managed to score 73 in the allotted six overs.
In response, L & T openers Ashurith and Prajwal started off swiftly. Al Nahda was left wondering on a chilly day how to contain the rampaging Prajwal who smashed 5 sixes in his 17-ball 34 that entertained everyone watching the final. He was rightly adjudged player of the match for his outstanding knock.
However the twist in the tale was the last over with 21 required, Al Nahda captain – Rizwan brought himself on. Having been hit for 3 sixes by Prajwal he managed to dismiss Prajwal with 3 runs required and get a run out of Himanshu as he attempted the 2nd run to win the match.
In the Super over Prajwal smashed Hari Ganguly for 2 sixes and setup a score of 18. In response Al Nahda only managed to get 9 runs in the over bowled by Himanshu.
The individual honours were as follows: Stylish batsman of tournament was bagged by Hemant (L&T), stylish bowling action was bagged by Zia – Bittu ( Al Nahda), best bowler of the tournament – Sameer (Shamel Plastics), best batsman of the tournament - Prajwal (L &T), Man of the Series Hri Ganguly (Al Nahda)
Ali bin Saif Al Maskery, HR Manager, Composite Pipes Industry was the chief guest and he distributed the prizes in the presence of senior CPI management.
This event would not have been possible without the support and sponsorship from Al Sidrah Oil & FGas, Al Khowair Chemicals, Space-Tech Trading, Jubilee Engineering, Vector Engineering, Lifiting Equipment Services, Galaxy, A1 Engineering, Logistics LLC, Anwar Khaweena, Watson Logistics, Nektel, Ocean Rubber, Peerless and Zurich Industries.