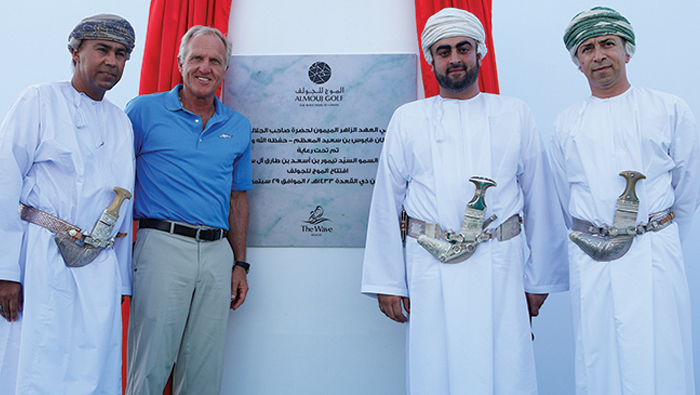 Muscat: Golfing legend and world-renowned course designer Greg Norman has once again expressed his delight with the stunning Al Mouj Golf ahead of the oceanfront course welcoming the European Tour’s finest players from February 28 – March 3 for the second edition of the Oman Open.
The Great White Shark, who has overseen the design of numerous Championship courses around the globe, including the Ayla course at Aqaba, Jordan and the Earth course at Jumeriah Golf Estates, the home of the European Tour’s season-ending DP World Tour Championship, knew from the moment he arrived in Muscat it could be the start of a terrific journey.
“When I first visited our site at Al Mouj in Muscat, Oman in 2006, I knew right away that we had the opportunity to create something very special,” said the 14-time European Tour winner. “Not only because of the spectacular seaside location on the shores of the Indian Ocean, but also the natural beauty, history and culture of the entire region.
“Al Mouj Golf is close to my heart and it’s certainly one of the finest golf courses I have ever designed anywhere in the world. There was no doubt in my mind that this would eventually become one of the most unique golf destinations of the world, so we certainly had to build a course that would measure up to that standard.”
Prior to hosting European Tour stars, Al Mouj Golf had first opened its doors to the professional golfing scene in 2013 with the Oman Golf Classic – the penultimate event on the European Challenge Tour schedule. Overwhelming approval from players and fans saw the tournament upgraded to become the Challenge Tour Grand Final just two years later before the European Tour jumped in on the action and added it to their schedule in 2018 with Joost Luiten sealing the inaugural title.
“Having hosted four European Challenge Tour events, including two Grand Finals, and last February’s inaugural European Tour event, I would have to say we more than accomplished our goal’” said the former World No.1 and two-time Major winner.
“It’s been good to read all the accolades the course has received from players and officials over recent years. It’s also been extremely rewarding to see the positive effect it has had on the growth of golf in the Sultanate of Oman and throughout the region. I’m looking forward to many more great things to come at Al Mouj at the 2019 Oman Open.”
The Oman Open gets underway at Al Mouj Golf, Muscat on February 28 and will feature a world-class field including 1999 Open Champion Paul Lawrie, Ryder Cup stars Robert Karlsson, Thomas Bjørn, Chris Wood and Stephen Gallacher along with Omani National Azaan Al Rumhy and defending champion Luiten.