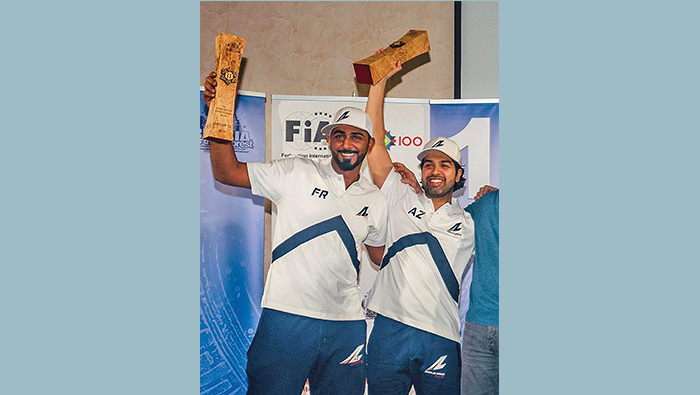 St. Petersburg: FIA World Cup for Cross Country Bajas pairing Abdullah Al Zubair and Faisal Al Raisi produced a star performance during the opening round of the 2019 season in Russia over the weekend, the Omani duo battling back superbly from an early excursion to secure a memorable podium.
Ending the challenging Russian Northern Forest Baja second in the T3 class and 11th in the overall classification, the AZ Racing duo delivered an impressive account of themselves across the three days from Friday, January 15 , to Sunday, January 17, where close to 500 kilometres was covered.
Notably, the first Baja of the season marked the maiden outing for Al Zubair and Al Raisi on a snow rally, making their class-topping pace and huge competitiveness even more eye-catching and a true indicator of their potential for the remainder of the 2019 campaign. terrific start to 2019 season
The championship’s first ever all-Arab pairing were up to speed immediately on the opening stage on Friday at Helyulya Airfield, delivering strong pace in the No.222 BRP Maverick X3 ‘rally raid’ two-seater quad.
Covering just 19 kilometres, the shortest stage of the Baja, the day one Prologue was going very well for AZ Racing but with only six kilometres to run an unfortunate slide into a snowbank meant the car had to be extracted from the side of the road, and thus incurred a penalty.
Therefore beginning Saturday’s Leg Two action with a real mountain to climb, sitting ninth in the T3 class and last overall some 40 minutes adrift of the lead, Al Zubair and Al Faisal remained justifiably confident in their ability and made superb progress during their first full day of competition on snow.
Ending Stage Two second in T3, in 13th position overall, the AZ Racing duo then won the T3 class on Stage Three and finished inside the outright top 12, a result made all the more impressive as Al Zubair had to contend with broken front-left suspension for the last 40 kilometres.
Having started Leg 2 of the Russian Northern Forest Baja ninth in class, the Omanis concluded Saturday seventh in T3 and less than 13 minutes shy of the class podium, setting up an intriguing final day.
Starting Leg Three on Sunday first on the road in T3, Al Zubair and Al Raisi again impressed to win their class on Stage Four and also place ninth overall.
Aiming for more of the same on Stage Five, a fallen tree blocked the road along the course and so the stage was cancelled, bringing an early end to the Baja.
Abdullah Al Zubair: “We are very happy to finish second in our class, especially after the difficulties we had on the first day when we lost a lot of time and had to start last on Saturday. We pushed very hard and gained over 14 positions during the final two days.
Competing on snow
“We have to say a big thank you to the South Racing team who kept us going and gave us the support required to reach the podium. Given this has been our first time competing on snow and therefore we had no experience, I think we did a fantastic job compared to the competition.”
Faisal Al Raisi: “We are very proud of our achievements in our first rally this season, it was great to prove Abdullah and I can fight back strongly and compete with the best. It was a very difficult rally for us as we had to endure below freezing temperatures and, as this was our first time in the snow, our learning curve had to be very fast in order to catch up with the others.”
Cross Country Bajas
Round two of the FIA World Cup for Cross Country Bajas sees the championship visit the deserts of Dubai from Thursday, 7th March, until Saturday, 9th March. Before then, AZ Racing will be in action during the opening round of the FIA Cross Country Rally World Cup which begins just a few days from now, this coming Thursday, 21st February, in Qatar. The event runs until Tuesday, 26th February.
FIA World Cup for Cross Country Bajas – Rd1 T3 Class Result: 1st CR Racing – Polaris RZR 1000: 6hrs23m02s (Michele Cinotto/Maurizio Dominella), 2nd AZ Racing – BRP Maverick X3: 6hrs44m01s (Abdullah Al Zubair/Faisal Al Raisi), 3rd Team Maria Oparina – Polaris Ranger RZR XP: 6hrs47m03s (Dmitri Ponomarenko/Dmitri Karpov)
FIA World Cup for Cross Country Bajas – Rd1 Overall Result: 1st RE Autoklubs – Mitsubishi Pajero: 5hrs19m07, (Tapio Lauronen/Toni Tapio Lauronen), 2nd VRT – Mini Cooper Countryman: 5hrs21m28s (Vladimir Vasilyev/Konstantin Zhiltsov), 3rd Pitlane UAB – Toyota Hilux: 5hrs31m.33s (Benediktas Vanagas/Bartlomiej Boba), 11th AZ Racing – BRP Maverick X3: 6hrs44m01s, (Abdullah Al Zubair/Faisal Al Raisi).