Beijaflore on brink of win ahead of finale 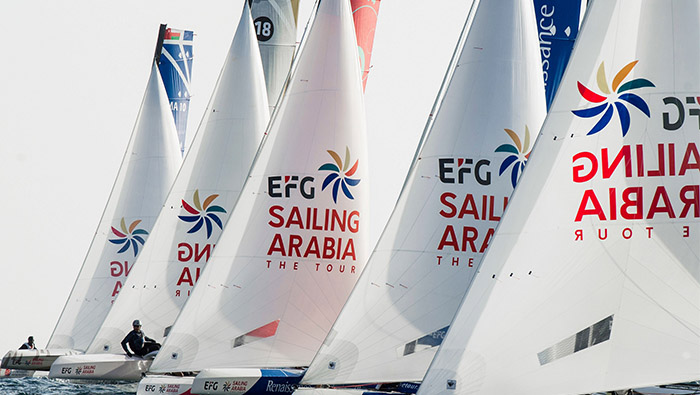 Muscat: Beijaflore are on the brink of back-to-back EFG Sailing Arabia – The Tour titles after taking victory in the final coastal Raid of the 2019 marathon down Oman’s coast.
The French defending champions have one hand firmly on the trophy having put on a masterclass of light wind racing in Salalah on the penultimate day of the two-week event, which also saw them add a further win.
The Raid win ahead of their closest Tour rivals CheminéesPoujoulat – who finished the Salalah Raid in second place with Oman Shipping Company third – effectively puts them in a realistically unassailable position on the top of the EFG Sailing Arabia – The Tour leaderboard.
While Beijaflore go into Sailing Arabia finale with an eight-point lead, the contest for the two remaining places on the podium remains undecided.
In second overall, CheminéesPoujoulat is only three points ahead of Oman Shipping Company, while Seaflotech and Mood are only separated by half a point and just four points from a shot at third place.
It’s a podium challenge embraced by the Mood team, making their debut on Sailing Arabia – The Tour. Skipper Damien Iehl leads a talented squad which comprises Benjamin Amiot, AurélienDucroz and Pierre Le Clainche.
“We are happy to have taken fourth place on the Raid as a team, we stayed together and came back well from a bad start,” said Iehl, speaking after a Raid which took over four hours to complete.
“It has been a very long day on the water, and you have to stay focused for five or six hours, but it has been a really good day.
“We perhaps still have a chance of a place on the podium, though not top two as Beijaflore and Poujoulat sailed very well, so third place, which will make it very interesting tomorrow. If we sail very well it is possible for us, it is very close. Can we do it? We will see tomorrow.”
A little further down the table the competition is also tight, with Golfe du Morbihan and EFG Bank also separated by just half a point, and CER Geneva just 3.5 points further back.
“We are within a few points of EFG and Golfe du Morbihan so we will try our best, but the main thing for us now is that we enjoy our final day in Salalah,” said CER’s Victor Casas, who races with Matthieu Ravussin and Swiss twins Nelson and LauranneMettraux.
“We have really enjoyed the Tour, but we are all getting a little bit tired now after two weeks, and it is hard to keep focused for so long on a long day like today. But it is really good training for the Tour Voile for us as we are a new crew and we are trying different things and doing our best.”
Friday’s light airs in Salalah were a sharp contrast to conditions earlier on the Tour in general, and in particular to Sur – where strong winds ruled out any racing – and at the previous venue in Duqm which saw exhilarating racing in 20-plus knots of breeze over two days.