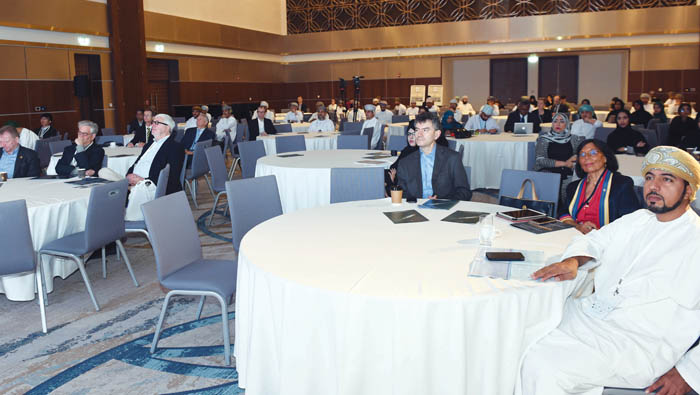 Muscat: The Ocean Economy and Future Technology Conference, organised by the Foreign Ministry as part of the agenda of the International Forum Science and Technology Diplomacy (IFSTD), continued its activities yesterday at Oman Convention and Exhibitions Centre.
Dr. Yousef bin Abdullah Al Balushi, head of the Science, Knowledge and Technology Transfer Office at Foreign Ministry and Chairman of the Organising Committee of the Conference, said that the conference after its second day is going towards achieving many of the goals that were set for it. He pointed out that it reached about 90 per cent, and remaining goals are expected to be completed before the last day.
He added that this conference is held for the first time in the region with the participation of various sectors of the government sector, industry and academia, and linking the subject with the global agenda specialised in the field of sustainable development, noting that many speakers praised the laboratories where many issues were discussed and they transferred the discussions to several countries, at the level of governments or the industrial and economic sectors of the world.
On the most important agreements that are expected to be signed on the sidelines of the conference, Al Balushi said that there are closed laboratories and discussions that have been examining the presented projects through the Implementation Support and Follow up Unit for several months to identify the ready opportunities and offer them to the participating investors. He added that the indicators augur an international acceptance of those institutions and that they are waiting for available opportunities. The conference included 8 parallel panel discussions on fishing, renewable energy in the continental shelf, logistics, maritime transport, aquaculture, oil and gas, mining in the continental shelf, skills and competition in the ocean economy, as well as the economy of the Omani Ocean.
More than 900 participants, 80 exhibitors and 86 international speakers and experts representing 30 countries are participating in the conference, which will be concluded today (Wednesday) to highlight future technology, innovation in the ocean economy and promote international cooperation in the ocean economy, targeting a number of workers in different sectors.
On the sidelines, closed laboratories were held to explore potential opportunities, sectors and discussions with investment companies to implement a series of international projects in the Sultanate and attract investments. Paul Holthus, CEO of the World Ocean Council, said that there are many possibilities and opportunities for investment in the ocean economy and in various sectors of the blue economy. He pointed out that the Sultanate is integrated in this economy due to the long coastline and strategic location overlooking the Indian Ocean.