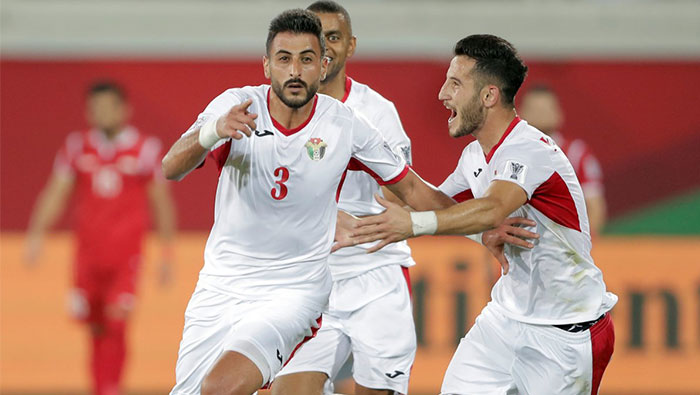 Muscat: Jordan have beaten Syria by two goals to nil in their Group B match of the 2019 Asian Cup.
The result makes them the first team to qualify for the knockout stages of the 2019 Asian Cup, which is being held in the United Arab Emirates.
Winger Mousa Al Tamari opened the scoring in the 26th minute, and centre back Tamer Khatab doubled the Jordanians' lead in the 43rd minute.
Although the Syrians did dominate possession with 65 per cent of the ball, it was Jordan who had the better opportunities, fashioning 18 chances to the Syrians' 11.
The result means that Jordan are now on top of Group B with six points from two games, while the Syrians only have a point. The final round of Group B games will see Australia play Syria, while Jordan face Palestine.
Meanwhile in Group A, Chanathip Songkrasin's one goal was enough to give Thailand a 1-0 win over Bahrain.
Thailand went into the game knowing that they needed a win to stay alive in the competition, having lost their opening game 4-1 to India.
**media[989963]**
Bahrain may have had more shots on target (13) compared to Thailand’s eight, but it was a case of quality over quantity as the Thais registered their first win of the tournament. Bahrain will now have to hope that the UAE beat India in their upcoming game, and register a successful result in their final match against the Indians.
The result sees Thailand climb to second after their win at the Rashid Al Maktoum Stadium in Dubai, behind toppers India on goal difference alone.