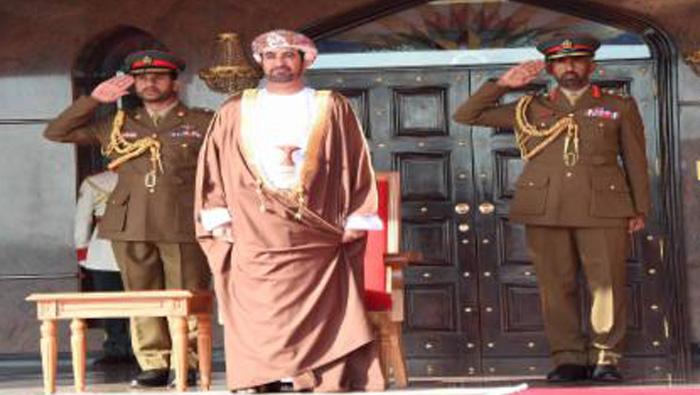 Muscat: The Royal Army of Oman (RAO) yesterday celebrated the graduation of the Officer Cadets Batch and Specialised University Officers Batch from the Sultan Qaboos Military College (SQMC) under the patronage of Sayyid Khalid bin Hilal bin Saud Al Busaidi, Minister of the Diwan of Royal Court.
The ceremony, which was held at the military parade ground at Mu’askar Al Murtafa’, started with a military salute to the chief guest of the event. The RAO Music Band played the Royal Anthem.
The graduated officers staged a military parade in front of the main dais at the celebration ground.
The Minister of the Diwan of Royal Court handed over the sword of honour to officer cadet Yousef bin Nasser Al Tobi of the Royal Guard of Oman (RGO), who won first place in the Officer Cadets Officer Batch.
The graduates performed the RAO anthem, took loyalty oath, and proclaimed thrice Long Live His Majesty Sultan Qaboos bin Said, the Supreme Commander of the Armed Forces.
Then, the graduates’ column performed the military salute.
The Royal Anthem was then played. The leader of the column came forward requesting a permission to dismiss the parade ground. The column passed in front of the main dais performing the military salute to Minister of the Diwan of Royal Court.
The ceremony was attended by ministers, commanders of the Sultan’s Armed Forces (SAF), other military and security apparatuses, members of the State Council and Majlis Al Shura, senior officers at SAF and other military and security apparatuses, retired commanders and senior officers, military attachés in embassies of the sisterly and friendly countries in the Sultanate, RAO personnel and parents of graduates.