Past and present intermingle in this sleepy Omani coastal village 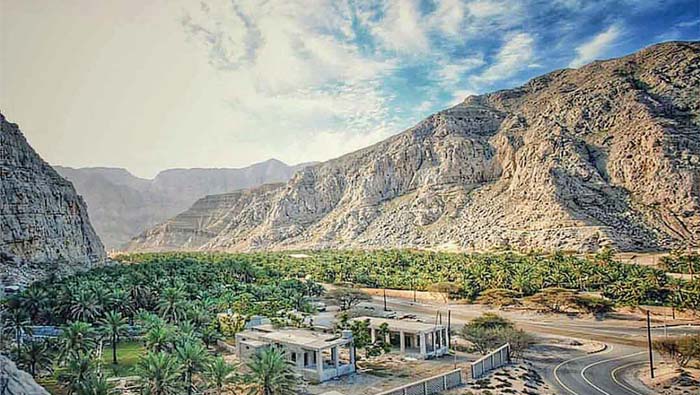 Bukha: Overlooking the Arabian Gulf ‘Ghamada’ in the Wilayat of Bukha in the Governorate of Musandam is a picturesque place combining the costal, valley, mountain and plains landscapes.
The village is located in a valley extending 4 kilometres to the east and ending to the west side of the sea. It is characterised by its diverse nature, which combines the coast, the valley, the plain, the high mountains and sand dunes, making it a tourist attraction and an outlet for mountaineering enthusiasts and other sports.
It is one of the largest villages, in addition to the villages of ‘Al Jadi’, ‘Al Jari’, ‘Fadghaa’ and ‘Teibat’.
In ‘Ghamada’ Village, there is an ancient archaeological site dating back hundreds of years, known as “old grandmother”.
It shows traces of the remains of houses in a residential neighbourhood and a mosque. In the middle of the site, there is graveyard. The area was inhabited by Omani people since ancient times.
‘Ghamada’ Village is characterised by its dense farms on both sides of the valley, such as date-palms, fruits and seasonal crops. The village is one of the most fertile areas in the wilaya, along with ‘Al Jadi’ Village, which is of the same nature of ‘Ghamada’. All the village farms are irrigated from groundwater wells.
**media[977501]**
The water of overflow valleys is exploited during the rainy times. Large amounts of water are reserved for these farms through openings at the top of each farm to enter the running water, locally called (mashrab) and the drainage openings when the farm is filled with water called (mansam.)
Agriculture is the main profession in the village where they grow date-palms of various kinds, locally known as (Khenezi, Al Lulu, Qash Habash, Al Khasab, Al Marziban and Al Meznaj) and fruits like banana, lemon and mango.
A number of craftsmen in the village make handicrafts of various types and benefit from date-palm fronds in the manufacture of summer houses in the past, locally called (Al Arish), the manufacture of roofs and the floors of local councils, locally known as (Al Da’an), as well as the manufacture of some household items, dates harvesting and storing. This profession has gradually diminished to very few craftsmen.
Mohammed bin Said Al Shehi, a village resident, said “I have worked in crafts of date-palm fronds for more than twenty years. I prepare the raw materials from the date-palm fronds which I bring from my farm and store them in the room where I make these products. Collecting the raw materials represents 80% of the work”.
He added that among the professions that are practiced by some of the villagers is collecting honey, a profession practiced by many villagers, especially the youth, because of its good economic returns.
Livestock breeding is also practiced by a large number of villagers. This profession is not limited to a particular category, but is practiced by the young and the old people. Most of the goats are domestic, in addition to few sheep. They graze in the mountains around the village in fertile quarters and feed them from grains and grass in the dry seasons. There is a noticeable demand for them locally, especially in social and religious events and other occasions. ‘Ghamada’ Village is famous for high white sand dunes that are formed by wind over the years, which made them white and beautiful. They decorate the mountains surrounding the coastal area of the village.