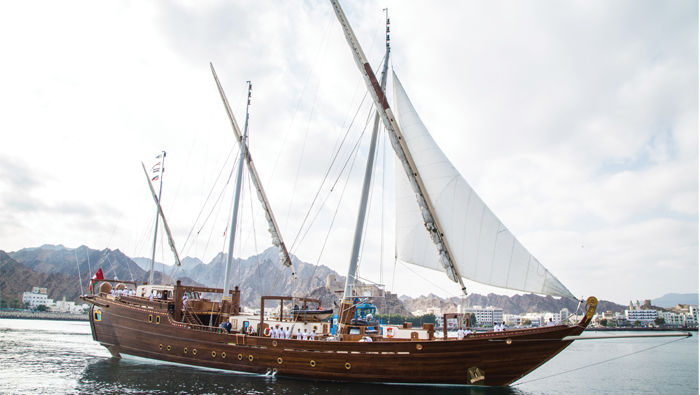 Muscat: One of India’s top military commanders has said that Indian and Omani sailors are brothers at sea, pointing to the long history of naval and maritime cooperation between the two nations.
Vice Admiral Anil Kumar Chawla, Flag Officer Commanding at the Indian Navy’s Southern Naval Command, said the two countries had a deep maritime history and were invaluable strategic partners.
Chawla was speaking on the occasion of the 10th anniversary of the Indian Ocean Naval Symposium, an exercise devised by the Indian Navy to foster a better understanding with its partners in the Indian Ocean region. On this occasion, Omani vessel Zeenat Al Bahar sailed to Kochi as part of the exercises, before returning back to Port Sultan Qaboos alongside INS Tarangini, which stayed docked in Muscat for two days.
“Oman was one of the first two countries with which the Indian Navy began joint exercises in 1993, the other being Singapore, and with the naval exercise next year, we will probably complete the silver jubilee, because the exercise is held once in two years but it just goes to show the emphasis and the importance that we attach to our relations,” he said. “I am particularly pleased to be here because we had seen off these ships on November 14 in Kochi, in a very big ceremony that was attended by the representatives of more than 26 countries.”
“I would say that seeing almost 10,000 of our countrymen who lined the Kochi channel to see off these ships was a spectacular sight. This was, of course, to commemorate the 10th anniversary of the Indian Ocean Naval Symposium,” added the Vice Admiral. “I would like to congratulate the skippers of Zeenat Al Bahar and INS Tarangini for completing this joint sailing expedition, and would like to extend our heartfelt gratitude to the Royal Yacht Squadron and the Royal Navy of Oman for participation in this historic event.”
This is not the first such maritime exercise conducted between India and Oman, but the third that has been organised over the last 15 years.
“This was an attempt to recreate the passage of ships through the traditional sailing routes, which were also called mausim because the sailors used to use the monsoon winds to guide them,” added Chawla. “Under the leadership of His Majesty Sultan Qaboos and Indian Prime Minister Narendra Modi, the relations between our two countries have further developed, and the Sultanate is a strategic partner of India, and also an important maritime partner.”
The event was held in the presence of Nasr bin Hamoud Al Kindi, Secretary General of the Diwan of Royal Court Affairs, who was greeted by a guard of honour consisting of Omani sailors, as well as Indian Defence Secretary Sanjay Mitra and Rear Admiral Abdullah Al Raisi, commander of the Royal Navy of Oman, as well as Munu Mahawar, Indian Ambassador to Oman.
“This is an exercise to increase maritime cooperation of the states of the Indian Ocean region,” said Mahawar. “This year, the Indian Ocean Naval Symposium completed a decade of working together productively and relentlessly to strengthen maritime security in the region. To celebrate this occasion, the Indian Navy hosted a seminar in Kochi on November 13 and 14. As part of these celebrations, three tall ships, Royal Yacht Zeenat Al Bahar from the Sultanate of Oman, INS Tarangini, and INS Sudarshini, have undertaken a joint sailing expedition from Kochi to Muscat.
“They have retraced the ancient maritime trade routes from the Malabar Coast to the Gulf,” he added. “INS Sudarshini has faced a technical glitch and will be slightly delayed. A crew from eight nationalities is on board these ships. These countries are India, Oman, Australia, Bangladesh, the UK, China, Maldives, and Sri Lanka. We are also happy to welcome INS Sujata to Muscat, which was escorting these yachts.”