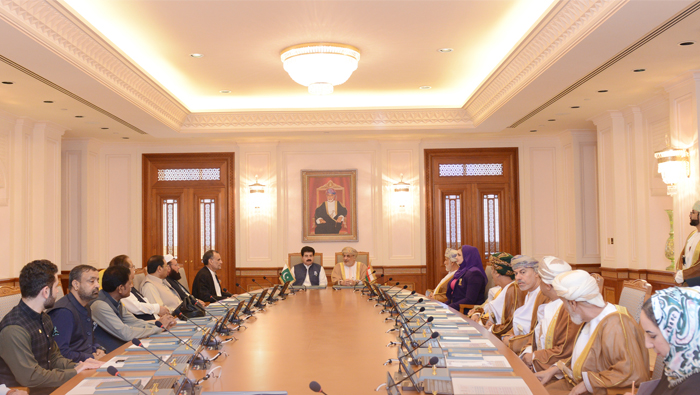 Muscat: A Memorandum of Understanding (MoU) was inked on Monday between the State Council and the Pakistan Senate to intensify cooperation and build stronger ties.
Pakistan Senate Chairman Muhammad Sadiq Sanjrani and accompanying officials are visiting Oman until November 21, in response to an invitation from Dr. Yahya bin Mahfoudh Al Mantheri, Chairman of the State Council.
The visit comes within the framework of positive bilateral relations between the Sultanate and Pakistan, and the two countries’ keenness to strengthen the existing cooperation between them across several fields.
Al Mantheri warmly welcomed Sanjrani and his accompanying delegation and highlighted the importance of the visit. He added that it served to strengthen cooperation frameworks and open new avenues in the quest to enhance closeness between the Sultanate and Pakistan, and in this regard, spoke about his visit to Pakistan earlier.
He added that the current visit of the Chairman of the Senate of Pakistan to Oman coincided with the Sultanate’s celebrations of the 48th National Day. This is an auspicious national occasion which marks the achievements of comprehensive development and civilisational achievements by the Sultanate.
The delegation viewed a documentary on the State Council that showcased the evolution of the Shura march in the Sultanate and the role of the State Council in national action, which empowers it to exercise its powers and competencies.
During the meeting, issues of mutual interest were discussed, especially in the legislative and supervisory fields to support cooperation between the councils of the two friendly countries.
For his part, Sanjrani expressed happiness over the visit to the Sultanate, and added that Pakistan looks forward to heightening progress, prosperity and development in relationships and praised the Omani parliamentary experience, development and uniqueness gained by following the pragmatic vision of His Majesty Sultan Qaboos bin Said. Sanjrani also praised the country’s balanced policies and its stance in the international arena.
The meeting was attended by Sheikh Dr. Al Khatab bin Ghalib Al Hinai, State Council Vice Chairman; Dr. Suad Mohamed Ali Sulaiman Al Lawati, State Council Chairperson; State Council members; and Ali Javed, Ambassador of Pakistan to Oman.
A Memorandum of Understanding (MoU) between the State Council and the Senate of Pakistan in parliamentary fields was inked by Al Mantheri and Sanjrani.
On the conclusion of the visit, the guests toured the facilities and premises of the Council.
The Pakistan senate delegation included members Azam Khan Swati, Moula Bux Chandio, Dilawar Khan, Kuda Babar, Gul Bushra, Chief Secretary Dr. Akhtar Nazir and Special Secretary Muhammad Anwar.