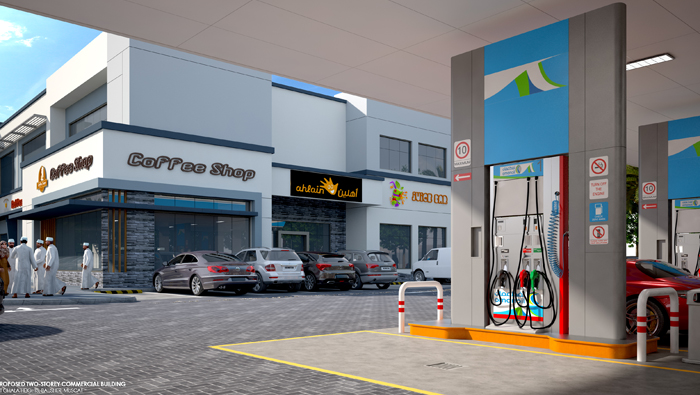 Muscat: With a multitude of services to Muscat Expressway road users, the details of the first fully integrated service centre, ‘Sayar 1,’ was announced yesterday by Bayan Investment House.
“The service station, Sayar 1, will provide road users with a diverse range of services, shops, various types of restaurants, cafés, male and female prayer rooms, toilets, ATMs, a money exchange, a pharmacy, and a gym. In addition, Sayar1 is located near an oil station, which adds another feature to it,” said Fahad bin Mohammed Al Khalili, Chairman and Chief Executive Officer of Bayan. The service station is located on the expressway in Ghala.
“The design of the building area is roughly 4,150 square metres, with commercial areas estimated at 2,643 square metres and space for 20 commercial units,” noted Ahmed Al Harmali, a partner in Bayan and Special Projects Department Director.
“The importance of the project lies in the fact that it is the first comprehensive and commercial service station on Muscat Expressway.
Recent statistics indicate that the expressway serves more than 1.4 million vehicles per year, which comes following the opening of the section of road up to Shinas and the UAE border,” Al Khalili added.
Regarding ‘Sayar 1,’ Al Khalili said, “The project aims to offer the best commercial service in the Sultanate, whereby it will serve as a meeting place and destination for travellers and road users.”
Al Harmali pointed out that ‘Sayar 1’ was focused on meeting the needs of customers, with regard to all aspects, explaining that it also has adequate parking spaces for customers.
With regard to the choice of name for the service centre, ‘Sayar’ was chosen, as in Arabic the word “sayar” means a paved road on which cars travel in only one direction, and isn’t intersected by any other road.
Fahad bin Mohammed Al Khalili, Chairman and Chief Executive Officer of Bayan Investment House, said during a press conference that the Bayan team boasted over 80 years of combined experience in the Omani market, working in the field of feasibility studies and the development of integrated projects, resulting in the establishment of partnerships with prestigious institutions which have led to the development of a number of projects.
He went on to note that the House of Bayan is extremely proud of the abilities of its Omani cadres across its various departments, with Omanisation standing at 80 per cent.
Al Khalili also stressed that there are ambitious plans in place to raise this ratio, along with plans to expand projects.