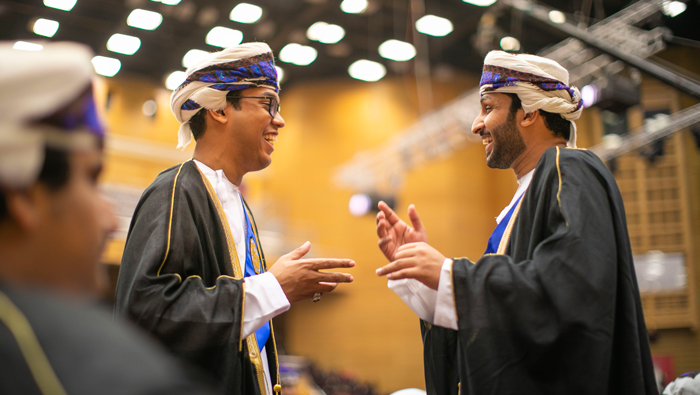 Muscat: Dr. Madiha bint Ahmed Al Shibani, Minister of Education yesterday patronised over the first session of the 29th Graduation Ceremony of the Sultan Qaboos University (SQU).
The ceremony marks the graduation of the 10th batch of PhD graduates, the 23th batch of master’s degree holders, and the 29th batch of bachelor’s degree holders.
As many as 2,954 graduates of the nine colleges, in the undergraduate and postgraduate streams, received their degrees during the graduation ceremony.
In the first ceremony, 1,651 graduates from the three humanities colleges and the College of Economics and Political Science of the university received their degrees.
The number of graduates from each college is as follows: the College of Law 202, the College of Arts and Social Sciences 593, and the College of Education 408; the College of Economics and Political Sciences 448.
Speaking on the occasion, Dr. Ali bin Saud Al Bimani, SQU Vice Chancellor outlined some of the achievements of the students of the humanities colleges and the College of Economics and Political Science.
The ‘Nuwa’ Company received the Best Student Company Award and the ‘Plugin’ Company was awarded the Elevator Pitch Award at Sharikati competition organised by Injaz Oman.
A number of the University’s students won first places at the 39th Youth Biennale Competition under 21-year category.
A number of faculty members received the National Research Award for the best research work presented by the Research Council.
Dr. Saeed Al Muharrami, Department of Economics and Finance, College of Economics and Political Science received the award in the Culture, Basic and Social Sciences sector and Dr. Ahmed Hassan Mohammed, College of Education got the award under the Education and Human Resources sector.
Her Highness Sayyidah Dr. Mona bint Fahd Al Said, Assistant Vice Chancellor for International Cooperation, received the Sheikh Issa bin Ali bin Khalifa Al Khalifa Award for Voluntary Work.
Dr. Suad bin Mohammed Al Lawati, College of Education, won the Scientific Competency Award in the Field of Women’s Empowerment in International Organizations, presented by the Regional Network for Social Responsibility.
Dr. Sulaiman bin Mohammed Al Balushi, from the College of Education received the Distinguished Arbitrator Award, awarded by the International Journal of Science and Mathematics Education; that Indexed in the Web of Science and Scopus, and Published by Springer, which is funded by the Ministry of Science and Technology in Taiwan.
Cyber Security
Dr. Mohammed bin Ali Al Fayrouz from the College of Economics and Political Science won the first prize in the Cyber Security Competition by Cyber Talents.
In terms of research, the SQU Vice Chancellor said that the University Council has adopted the establishment of the Center for Innovation and Technology Transfer at the University, where the Center will support students and academics in the process of education, innovation and entrepreneurship.
In the field of bridging the relationship between the students and the university administration, in order to communicate their votes and proposals, more than 6,925 students from various university colleges took part in the voting process for the Student Advisory Council Election.
Seventeen male and female students won in the election.
This year have witnessed a remarkable increase in participation than the previous years, with a participation rate of about 39 per cent.
The university is keen to promote e-services. It keeps on updating the electronic system and simplify the procedures, so that now the percentage of electronic transactions at the university has touched 80 per cent, according to the global standards of Information Technology Services Management.
Dr. Al Bimani said that the educational policy followed at Sultan Qaboos University encourages development and keeps up with the educational, training and research as a basis for the rehabilitation of its students according to the experiences and theories.
“The university has offered various possibilities for you; to come out to the society and work environments with bright ideas, and to provide the job market and the nation with your experiences, which will make you a real addition to the country. Work hard and do all your best for your country”, he advised the students.