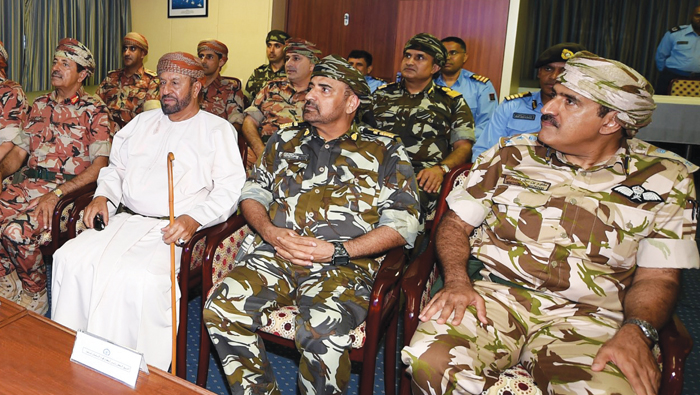 Muscat: Sayyid Badr bin Saud bin Harib Al Busaidi, Minister Responsible for Defence Affairs yesterday visited the land and marine operations theatre for the joint exercise ‘ Swift Sword 3’.
He also visited the Royal Navy of Oman (RNO) vessel ‘’Al Dhafirah’’ and the Royal British Navy Vessel ‘ Albion’ taking part in the Swift Sword 3.
The Minister Responsible for Defence was accompanied by Lt.Gen Ahmed bin Harith Al Nabhani, Sultan Armed Forces (SAF) Chief of Staff (Director of the Exercise), Rear Admiral Abdullah bin Khamis Al Raisi, Commander of RNO (Deputy Director of the Exercise), Maj.Gen Stuart Skits, Commander of the British Force, and assistant commander of the Unified Joint Forces participating in the exercise, and Maj.Gen Richard Stanford, Senior Loaned Officer.
The Minister Responsible for Defence Affairs and attendees reviewed the military, administrative and technical capabilities of the Omani and British forces.
They were also briefed on the mechanism for implementing the field plan and the events of the joint military exercise between the Omani and British forces.
At the end of the visit, the Minister Responsible for Defence Affairs hailed the high level of coordination, planning and organisation at the operation theatre between the Omani and British forces to achieve the prospective aims of the exercise as per the royal directives of His Majesty Sultan Qaboos bin Said, the Supreme Commander of the Armed Forces.
Meanwhile, a number of senior officers at the Sultan’s Armed Forces (SAF) and the other military and security apparatus and retired officers visited, yesterday, the command of the Joint Exercise Swift Sword 3 at Muaskar Al Murtafa’a, where they were received by a number of senior officers and briefed on the key activities of the exercise, the upcoming stages of the exercise, the government sectors taking part in the exercise and the goals planned.
They also visited the media centre of the exercise and acquainted themselves with the way to activate the media plans.