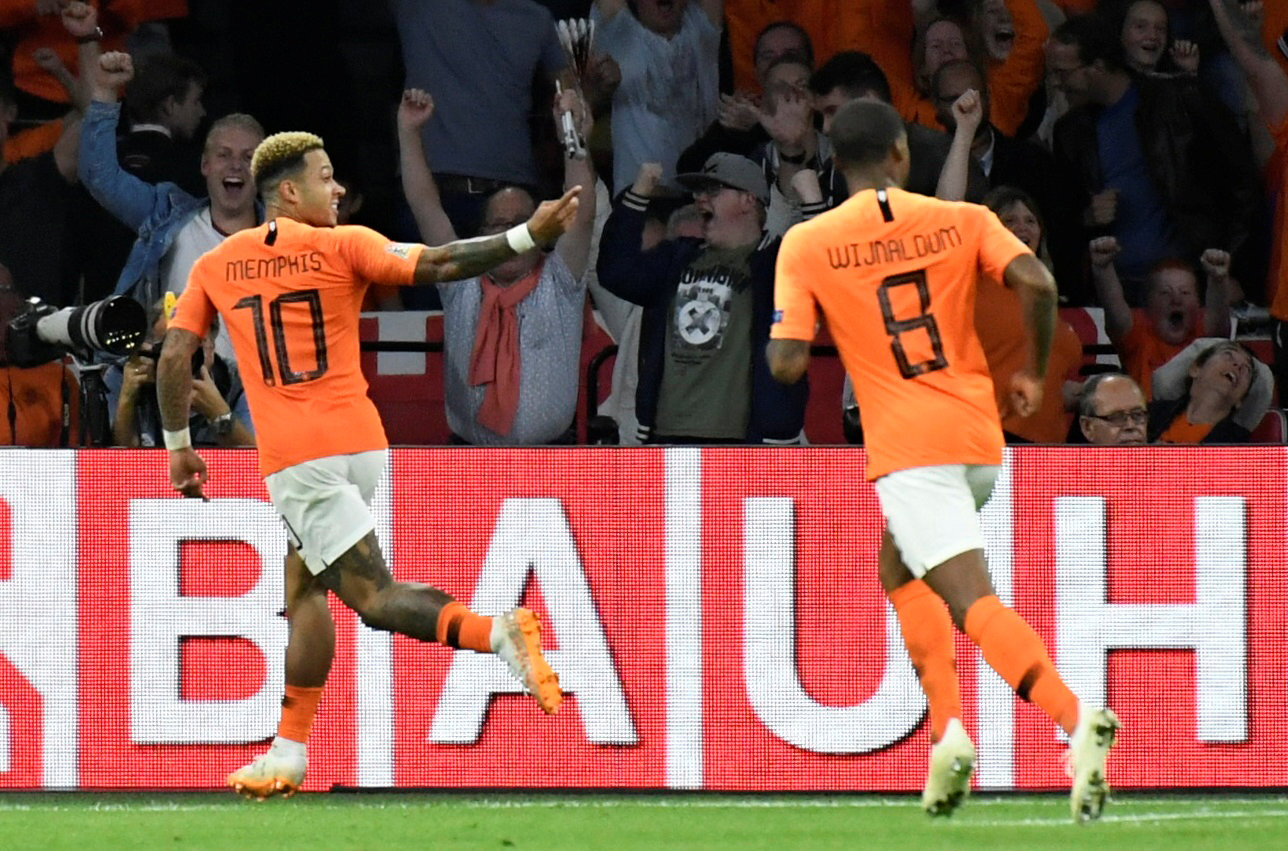 AMSTERDAM: Memphis Depay scored one goal and put in an exhilarating all-round display as the Netherlands outclassed Germany 3-0 in their UEFA Nations League clash at the Johan Cruyff Arena on Saturday.
Depay also struck the crossbar late on and Virgil van Dijk and Georginio Wijnaldum netted the other goals for a rampant Dutch side as their resurgent home form continued with a sixth victory in their last seven in front of their own fans.
The win was a first in 16 years for the Dutch over Germany, who have one point from their two League A, Group 1 matches and face a trip to pool leaders and world champions France on Tuesday.
The 2014 world champions dominated possession but failed to convert their chances and the Netherlands hit them on the break to heap more pressure on Germany coach Joachim Loew, whose side have won only three of their 10 matches in 2018 and were knocked out of the World Cup at the group stage.
Netherlands coach Ronald Koeman handed debuts to PSV Eindhoven duo Denzel Dumfries and Steven Bergwijn, while Germany gave a first cap to forward Mark Uth, who plays for Schalke.
Depay had an early chance for the hosts but was denied by the quick reactions of Manuel Neuer, while at the other end Timo Werner put his tame shot wide when through on goal.
Teenager Matthijs de Ligt was inches away from connecting with a Depay cross before the home side took the lead. Ryan Babel's header from a corner crashed against the crossbar and Van Dijk converted the rebound.
Substitute Leroy Sane, controversially left out of Germany’s World Cup squad and with much to prove in a national team jersey, was played into acres of space in the box on 65 minutes but fired wide when he looked certain to score his first international goal.
Koeman brought on another debutant in Nigerian-born Arnaut Groeneveld, ending the hopes of the African nation that he would turn out for them, as the home side looked to stem a growing German dominance in midfield.
The Dutch had to soak up pressure and looked to hit the visitors on the break -- something they managed on repeated occasions -- but both Depay and Wijnaldum drew blanks, when the former's effort was saved by Neuer before Wijnaldum shot wildly over the bar with just the keeper to beat.
Depay would not be denied his goal, though, and when he used his pace to outstrip the German defence again, this time he had the beating of Neuer.
The resounding win was completed late on when the lively Depay’s dummy put Wijnaldum through on goal and the midfielder drilled the ball low into the net to record the Netherlands’ largest ever victory over Germany.