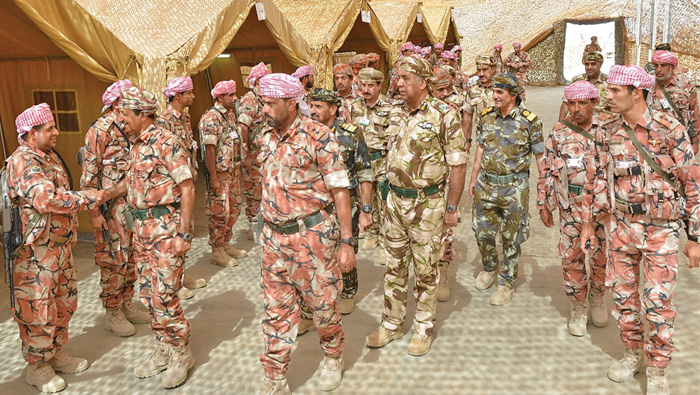 Muscat: The Chief of Staff of the Sultan’s Armed Forces reviewed the plans and met the soldiers taking part in the military exercise on Tuesday.
Lt. Gen Ahmed bin Harith Al Nabhani, Chief of Staff of the Sultan’s Armed Forces (Exercise Manager) was accompanied by Air Vice-Marshall Matar bin Ali Al Obaidani, Commander of the Royal Air Force of Oman (Exercise Chief Control), Rear Admiral Abdullah bin Khamis Al Raisi, Commander of the Royal Navy of Oman (Exercise Deputy Manager) visited the land troops and the ‘hypothetical’ enemy troops units taking part in Al Shomoukh 2 and Al Saif Al Sarea (Swift Sword 3) or SS3 military exercises to review their deployment mechanisms and the role they would play during the land operations.
The SAF Chief of Staff and other commanders were briefed on the tasks assigned to both commands during the exercise and the proposed solutions, as well as the measures to be taken according to the plan for the exercise.
Al Nabhani hailed the efforts made by the officers in-charge of the two forces and the proposed plans to meet the exercise objectives.