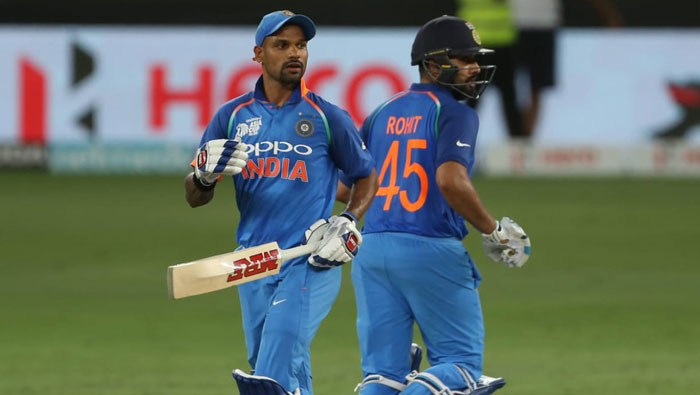 Muscat: India beat arch-rivals Pakistan by 9 wickets in their second game of the Super Four section of the 2018 Asia Cup, making light work of their opponents’ efforts at the Dubai International Stadium.

Pakistan put up a total of 237/7, with Shoaib Malik’s 78 runs from 90 balls which featured four boundaries and two sixes the standout innings for the men in green, who batted first. Support came from captain Sarfraz Ahmed (44), but apart from the two of them, Fakhar Zaman (31) and Asif Ali (30), there was little support from the rest of the Pakistani batsmen, who never really got going.

Yuzavendra Chahal, Jaspreet Bumrah and Kuldeep Yadav all picked up two wickets apiece to set the Indians – who have already beaten Pakistan once in the tournament – a rather modest target of 238.

And the Indian batsmen came out with the sole intent of winning this game: Rohit Sharma and Shikhar Dhawan were imperious against the Pakistani bowling attack, putting up totals of 111* and 114 respectively.

The result means that India are now top of the four-team Super Four table, having already beaten Bangladesh in their opening game of this stage of the tournament.

Pakistan’s next game is against Bangladesh on 26 September in Abu Dhabi, while Afghanistan face India a day before in Dubai.