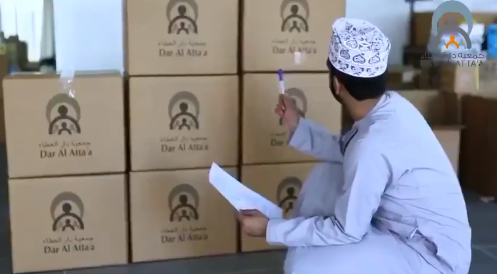 Muscat: In preparation for the new academic year 2018-2019 and as part of its relentless efforts to help needy students, Dar Al Atta’a recently provided a number of school tools and school uniforms, in association with the families welfare department.
The aid was distributed across 15 wilayats, and among them were Al Seeb, Bausher, Muttrah, Al Amerat, Quriyat, Muscat, Nakhal, Al Rustaq, Al Musannah, Sohar, Nizwa, Al Hamra, Bahla and Adam, where the number of schools that benefitted from the aid was 52.
The distribution of 6,372 school uniforms has been divided as follows: 2,992 dishdasha to 1,496 students, 3,380 full uniforms to 1,690 students, as two uniforms to each student. In addition to this, more than 3,755 school tools to needy students at a cost of OMR26,400 and school meal coupons to 2,000 students were also distributed.
The head of Dar Al Atta’a Association, Maryam Al Zadjali, declared that the association offered schools tools at the beginning of each academic year.
This aid came through the school students’ welfare programme, which was adopted by the association, to help students in government schools by offering them clothes, school tools, daily meals, scholarships for higher education and prepping classes at government schools, in addition to offering audiovisual consultations.
The school students’ welfare programme is considered one of the first programmes, which was adopted by the association since 2006 where the association had undertaken to offer aid to more than 6,000 students annually.
Dar Al Atta’a thanked all the donors and supporters of the school students’ welfare programme, in addition to the volunteers, and those who donated to support and help the students by providing them with school bags and school tools, which cost OMR8 per year per student, two uniforms at a cost of OMR16, in addition to school meals, which cost OMR36 per year per student, where the cost of each meal was 200 baisas per day.
Donations to schools can be made via account No. 0315003966850016/Bank Muscat and electronic donations can through donate.om/daralatta.