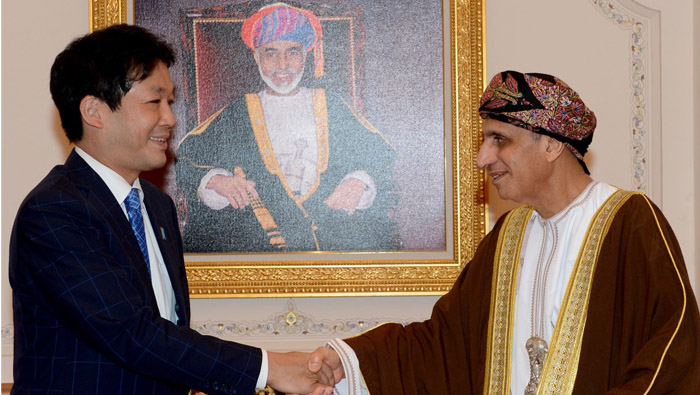 Muscat: His Majesty Sultan Qaboos bin Said received a written message from Shinzo Abe, Prime Minister of Japan.
The message was received by His Highness Sayyid Fahd bin Mahmoud Al Said, Deputy Prime Minister for the Council of Ministers when he received yesterday Kentaro Sonoura, Special Adviser to the Japanese Prime Minister and his accompanying delegation.
The guest conveyed greetings of the leadership in Japan along with and best wishes to His Majesty the Sultan, the Government permanent success and the Omani people further progress and prosperity.
They discussed growing relations between the two countries and means of enhancing them in various areas, as well as reviewing several current regional and international issues.
Sonoura hailed the rapid growth of the existing relations between the Sultanate and Japan, and his country’s aspiration towards further cooperation in the fields of economy and investment, as well as sharing expertise to serve the common interests of both sides.
He also praised the comprehensive development achieved by Oman at all levels, thanks to the wise leadership of the country, which has gained respect and appreciation of all.
Sayyid Fahd asked the guest to convey greetings of His Majesty the Sultan to Emperor Akihito and to the Japanese prime minister along with his best wishes of success to them, and the Japanese people further progress and welfare. The meeting was attended by Sayyid Badr bin Hamad bin Hamoud Al Busaidi, Secretary General of the Foreign Ministry and Mitsugu Saito, envoy of Japan.
Omani-Japanese business meet organised
An Omani-Japanese business meeting was organised by the Public Authority for Investment Promotion & Export Development “Ithraa” in coordination with the Ministry of Foreign Affairs on the sidelines of the visit of Kentaro Sonoura, Special Adviser to the Japanese Prime Minister currently visiting the Sultanate.
During the meeting “Ithraa” presented a working paper about services its provides in fields of promoting investment and developing non-oil exports. The paper also introduced the investment climate and opportunities available for investment in various sectors in Oman special economic zones.
Reviewed
During the meetings, the two sides reviewed investments and cooperation opportunities in different sectors including tourism, oil and gas, power and logistics and aviation sectors with the participation of number of concerned authorities of public and private sectors in the Sultanate.
Futaisi receives Japan diplomats
Dr. Ahmed bin Mohammed Al Futaisi, Minister of Transport and Communications received in his office on Sunday Kentaro Sonoura, Special Adviser to the Japanese Prime Minister and his accompanying delegation, currently visiting the Sultanate.
The two sides reviewed fields of the existing cooperation between the two countries in relation to the transport and communications sectors, as well as discussing issues of common concern for the interest of the two friendly countries.
The meeting was attended by Mitsugu Saito, Ambassador of Japan to the Sultanate.