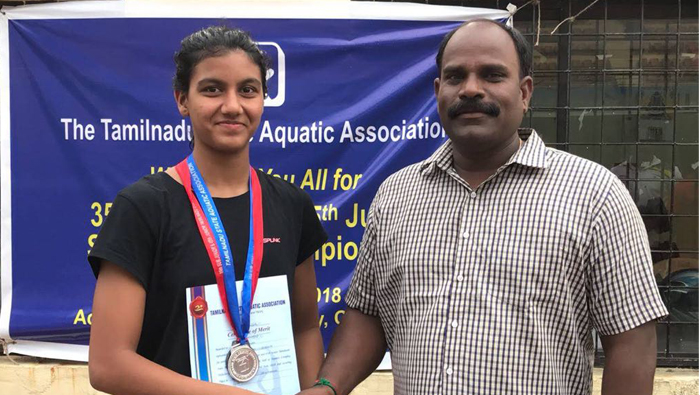 Muscat: KS Pooja, 16, became the first person living in Oman to qualify for the All India National Swimming Finals after winning a silver medal at the Tamil Nadu State Aquatic Championships.
A student at the Indian School in Ghubra, the starlet bagged the second place in the 50m freestyle Girls Group 1.
She won silver medals in both 50m freestyle and 50m butterfly, a bronze in 100m freestyle and also represented the State Relay team for the 4X100m freestyle.
The Indian expat is a member of the Nautilus Swimming Club Muscat, where she is trained by Head Coach Ivan Proskura. Pooja previously qualified to represent Tamil Nadu in the relay racing event, where she was placed fourth and at the 45th Junior National Aquatic Championship, where she posted the sixth fastest time nationwide in the 50m breaststroke.
Pooja is not the only star from the Nautilus Swimming Club Muscat to shine, with ace swimmer Rajvardhan Jadhav taking the fourth place in the Maharashtra State Trials 50m Butterfly race in his first state-level swimming competition. Additionally, 13-year-old Shipra Shetty, another budding swimmer from Nautilus, qualified for the finals of the 100m backstroke during the Karnataka Swimming Association State Sub Junior and Junior Aquatic Championship. Her timing in the 100m race was the seventh best in the state.