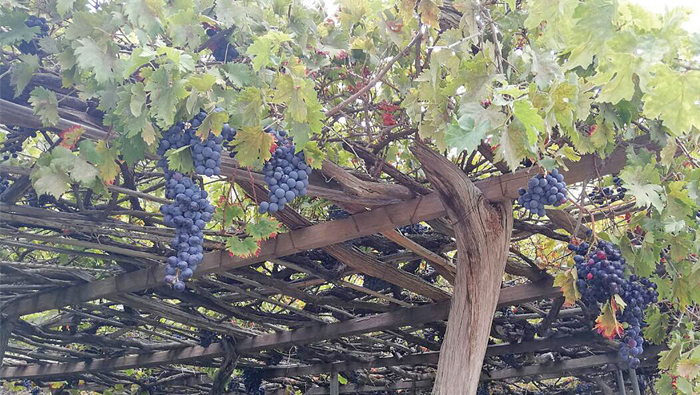 Nakhal: The villages of Wadi Mistal in the Wilayat of Nakhal are known for their variety of seasonal crops, including grapes, pomegranates, mountain peaches and apricots.
With the start of harvesting season of fruit crops in the villages of Al Qora, Wakan and Al Hajjar, the farmers of Wadi Mistal have begun marketing their agricultural products in the wilayat’s market. Grapes are the most marketed crops in the wilaya.
These days, a number of seasonal fruits, such as black grapes, peaches, pomegranates, and mango are displayed at auction in the market of Nakhal.
While grapes were selling at OMR12 for a box of about 5kgs, prices of local mango fell to OMR3 for twenty fruits. The small fruits of the first crop of pomegranate were sold at OMR3.5 for twenty fruits.
Cultivation of grapes requires great effort and attention. The farmers are keen to take care of these fruit trees with regular irrigation, fertilisation, trimming and cutting of nursery branches from time to time.
On the importance of the agricultural crops in this period, Abdullah bin Ahmed Al Arfati, a farmer in Wadi Mistal, said that during these days, the auction, locally called (Tana), of grapes began after a successful season that would result in a good harvest of grapes, pomegranates, and other fruits and corps.
The “Tana” of grapes of the Awqaf Mosque and the Holy Quran School in the village of “Al Qora” in Wadi Mestal began earlier.
Abdullah bin Ahmed Al Arfati said that the “Tana” is well known to the people as contributes to the revitalisation of the commercial activities and benefits the farmers and auctioneers.
He added that prices this year ranged from OMR150 to OMR460 per “Jalba”. Jalba is a local term used to describe a strip of land. It is an agricultural area of 25 square meters, irrigated with spring and Aflaj water. Usually, it contains three to four trees of black grapes.
Mansour bin Mohammed Al Riyami, one of the locals of Al Hajjar in Wadi Mistal, said that the villages of Wadi Mistal, especially Wakan and Al Qora are famous for their grapes, particularly black grapes.
These are harvested in August and sold in the neighbouring markets such as the market of the Wilayat of Al Rustaq. Tourists who come to the villages continuously also buy these grapes.
Al Riyami added that Wadi Mistal, which lies within the furrows of the western Al Hajjar mountains overlooking the Wilayat of Nakhal, is an important tourist attraction in the wilaya and frequented by visitors on a daily basis.
It is characterised by its varied seasonal crops, such as the black grapes which began its season during this period. He added that grapes are among the corps that are grown in mountain villages in Wadi Mistal due to the cool weather.