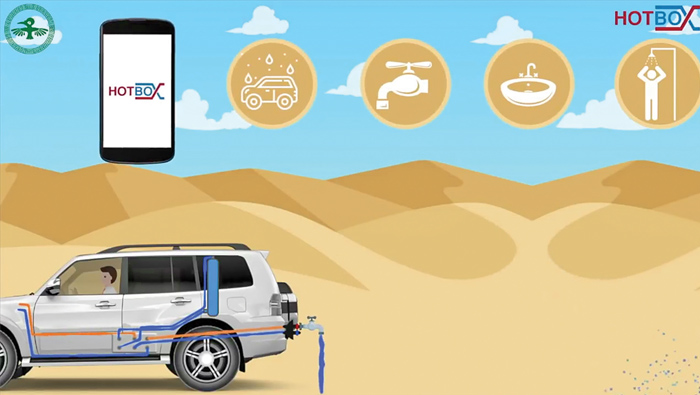 Muscat: A group of Omani engineers have created an innovative water-heating device to offer campers greater convenience while on the road.
Developed by the Muscat-based Aphcarios Engineering Solutions company, the HotBox uses heat generated by an SUV engine to heat water for showers and general use while camping. The device is controlled by an iOS/Android application.
Video: Get hot water on the go with this gadget for your car
Concept
Speaking to the Times of Oman, Abdulsattar Al Murshidi, CEO of Aphcarios, described its developmental process, saying, “Back in 2010 or 2009, we adopted what was actually a concept used in Australia to pick up water from a running stream or river.”
Given Oman’s different typography, Al Murshidi and his team adapted the concept for local use. “We took that concept and modified it to fit our requirements.”
**media[977488]**
Later, while working on another product, the idea for the HotBox was born. “We were working on a different product and there was a gap in the design and prototyping. At that time, we thought about just automating the home-made system we had.”
Al Murshidi had adapted a similar device for his own personal use. Realising the massive benefits of putting the product on the market, Al Murshidi decided to further develop the idea. “We decided to commercialise this because there was no product like it in the market.”
After beginning the normal design process of the concept, the Aphcarios team went through multiple phases to ensure the quality of the product, “making our first prototype, testing it, and the second and third prototype. It took almost six-seven months of testing the equipment because we really wanted a high-quality product”, Al Murshidi said.
**media[977487]**
Beyond its ambitious design and functionality, Al Murshidi and his team said that the device can fit into any car, utilise plug and play, assume full functionality when determining control, temperature, and pressure of the water, as well as allow users to know exactly how much of it is left.
Creating the device was not without its challenges.
Mahmood Al Hashmi, Design Engineer at Aphcarios, said, “We did face a lot of challenges in our development journey.”
One, he stated, was creating and maintaining a supply chain to boost the product, a challenge that included identifying the best development sites, checking and ensuring quality is maintained.
The project also allowed Aphcarios to frequently implement new ideas.
“One of the best solutions we had to experiment with new ideas or new solutions was rapid prototyping through 3D printing, which allowed us to test new ideas every day and that helped us through a lot of technical aspects in the design.”
With the Sultanate’s camping season right around the corner, the HotBox could provide tourists in Oman with even greater ease while exploring Oman’s natural wonders.
**media[977489]**
The Aphcarios team includes a number of highly talented designers, top qualified engineers, and highly skilled manufacturing specialists. The company’s unique dedication to quality product design and strong manufacturing links has allowed them to consistently create cost-effective and efficient products.