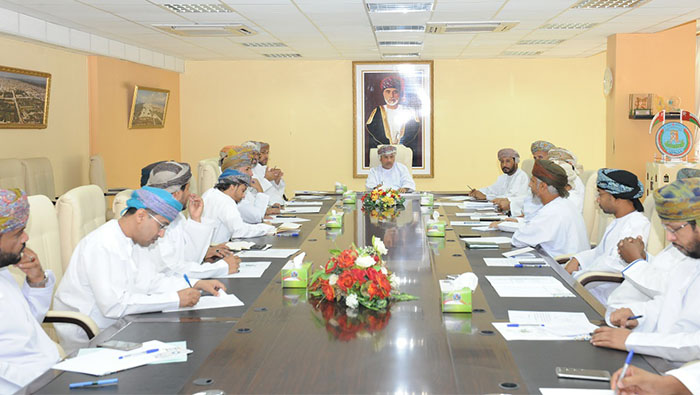 Muscat: A meeting was held to assess the readiness and progress of the work of the Civil Defense Sub-Committee in Dhofar in connection with the upcoming storm.
The Minister of State and Governor of Dhofar also discussed the developments of the expected tropical storm in the Arabian Sea and the accompanying effects on Dhofar Governorate.
HE Mohammed bin Sultan bin Hamoud Al Busaidi, Minister of State and Governor of Dhofar met with the Civil Defense Sub-Committee in the presence of Brigadier Mohsen bin Ahmed Al Abri, Chairman of the Committee and its members representing all governmental and civil sectors.
During the meeting, preparations were reviewed by the Civil Defense Sub-Committee and the concerned parties who deal with these cases. The importance of taking precautionary measures and measures to limit the effects of the situation were emphasised, in addition to enhancing the resources and capabilities necessary to deal with the storm. Also discussed was the need to identify mechanisms for mobilising the resources needed to support the operations of the system in the province and those that are expected to be affected by the storm.
At the end of the meeting, the Minister of State reassured citizens and residents about the readiness of rescue services and, for them to communicate with emergency centres to avail rescue services. He also told the Governmental organisations and the private sector to cooperate and provide the necessary support in these rare circumstances.
The Minister said, "We’re advising citizens and residents to be careful and not to risk crossing valleys, to stay away from low-lying areas and to avoid going to the sea when the tropical storm Mekunu hits. We also ask them to cooperate with the relevant committees in this regard and to comply with the instructions issued by the Sub-Committee of the Civil Defense of the province,"
Meanwhile, on Wednesday, 23 May, HE Sheikh Salem Al Shanfari met Municipality officials to determine the preparedness of the municipality and its departments. The Mayor of Dhofar issued an administrative circular to all municipalities and their departments to prepare for any emergency in order to avoid any damage that could occur due to Mekunu.
An emergency team was formed in the Municipality to examine these preparations and to discuss the latest developments in the governorate and the needs of the task forces.
As the tropical storm approaches the coasts of the province, Dhofar Municipality stresses the need of taking precautions and to only receive information from official sources. Officials also stressed on the need to not interfere with anything that is being circulated through the means of social media. It also stressed on the importance of communicating with the municipality through the call centre on 1771 and its accounts on social media.