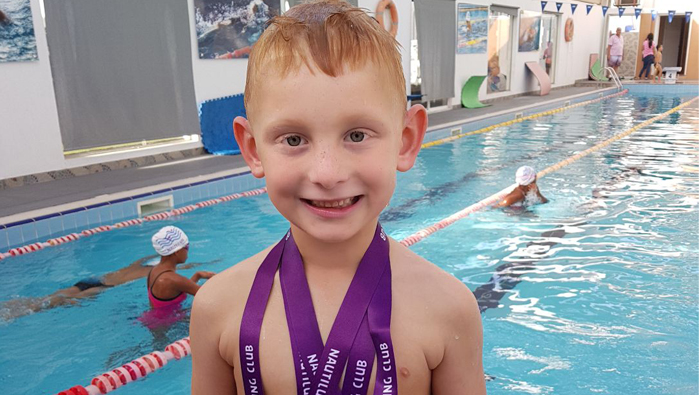 Muscat: Six-year-old Dylan Williams has a passion for swimming and for helping others.
An ace swimmer, Dylan goes to Royal Flight School in Muscat. To sharpen his skills, he trains regularly with a local swimming club, Nautilus Swimming Club.
Motivated by an incident last year, Dylan decided to kick start an initiative to help children who suffered from cancer and other life-threatening illnesses.
Last year, Dylan and his four-year-old younger brother, Rhys, were asked to send a postcard from Oman to a little girl named Jessie Stocks, who was suffering from cancer and had spent most of her life in a hospital in the UK. Jessie’s parents wanted to show her the world, so they put out an appeal for postcards to be sent from around the globe.
This sparked a fire in the young boy that ignited an initiative that’s focused on helping people such as Jessie.
“I have always wanted my children to understand the importance of being kind and considerate to others,” said Dylan’s mother, adding, “Dylan has always been a very loving and caring young boy who loves to help and care for others. He understands that there are other people in the world who are less fortunate than him and he always wants to help. As a mother, this makes me very proud and makes me want to help him even more.”
Tragic ordeal
Dylan asked about Jessie’s illness and realised that he was very lucky. He wanted to help her and her family deal with this tragic ordeal.
He came up with the idea to swim as far as he could in one hour, in a 25m pool, to raise money. With the help of Nautilus and its experienced swimmers, he swam for 1.7km and raised OMR1,250 for charity.
Today, Dylan will swim at Nautilus Swimming Club from 4.30pm to 5.30pm to raise awareness and collect donations. Rhys will also swim a minimum of 25m to support his sibling.
The money raised will go to four-year-old Jack Jeffreys from the UK who desperately needs medical funding. Dylan will also be raising money for an Oman cancer charity.