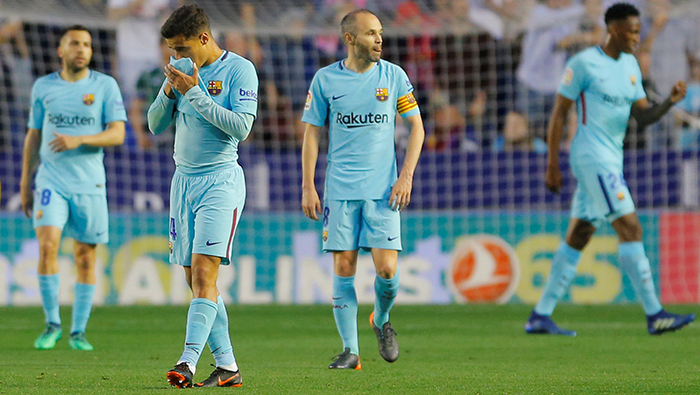 Valencia: Barcelona's hopes of completing an unbeaten La Liga season ended in thrilling fashion on Sunday as the champions suffered a shock 5-4 defeat at Levante in their 37th and penultimate game of the campaign after resting talisman Lionel Messi.
Levante raced into a remarkable 5-1 lead against the double winners after 56 minutes with a hat-trick from Ghanaian striker Emmanuel Boateng and two goals from Macedonian international Enis Bardhi.
Yet Philippe Coutinho also completed a hat-trick and Luis Suarez scored from the penalty spot as Barca fought back to set up a tense finale.
Yet, ultimately, despite coming close to a late equaliser, they failed in their bid to become the first team since Real Madrid in 1931-32, and the first since the league was expanded from 10 teams, to complete a league campaign without losing.
"I feel very angry but I have to look forward because what makes me angry isn't going to give me solutions," Barca coach Ernesto Valverde told reporters.
"It was a surprising game, because of the result and how it came about. They (Levante) are in very good form, they are very effective, they started the game really well and caused us a lot of damage on the counter-attack."
The shock of the season saw Barca suffer their first league loss since going down 2-0 to Malaga on April 8, 2017, ending an incredible, record-breaking sequence that had lasted 43 games.
It was the first time Barca had conceded five goals in a Liga game since they were beaten 5-1 at Malaga in December 2003.
The defeat also put the spotlight on Valverde's decision to rest his serial match-winner Messi -- not for the first time this season, but still a rare occurrence -- so close to achieving the unbeaten domestic campaign.
Levante, who were dangerously close to the relegation zone less than two months ago, took a shock early lead against the double winners when 21-year-old striker Boateng pounced from close range in the ninth minute.
Boateng strolled his way through a sleeping Barca defence and rounded goalkeeper Marc-Andre ter Stegen to double Levante's lead in the 31st although Coutinho's strike from distance pulled one back before the break.
Levante came out with renewed energy in the second half and immediately stretched their lead with a thumping shot from outside the area from Bardhi, who struck again after Boateng had completed his treble to further rattle Valverde's side.
Barca wake up too late
The fifth goal woke up Barca, however, and the champions suddenly came out fighting with three goals in the space of 12 minutes.
Coutinho scored two more to complete his treble, although his third was deflected off Suarez, who then converted from the penalty spot after Sergio Busquets had been fouled.
Uruguayan striker Suarez then headed narrowly over the bar while Busquets had a late, half-hearted penalty claim turned down although Levante's Ruben Rochina missed a gilt-edged chance to make it 6-4 down the other end.
The defeat left the champions on 90 points after 37 games, 12 more than second-placed Atletico Madrid, while Levante are 15th on 46.