Majlis calls for specialised media to focus on economy, tourism in Oman 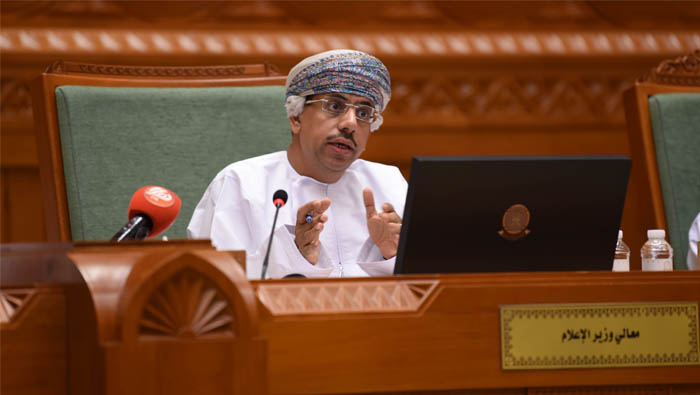 Muscat: The need for specialised media to highlight economic and other issues was among the issues highlighted on Monday during the discussion in the Majlis Al Shura on the statement of Dr. Abdul Munim bin Mansour Al Hasani, Minister of Information.
During its 19th regular sessions of the third annual sitting (2017-2018) of the 8th term (2015-2019), held under the chairmanship of Khalid bin Hilal Al Maawali, Chairman of Majlis Al Shura, Majlis Al Shura concluded discussing the statement of Dr. Abdul Munim bin Mansour Al Hasani, Minister of Information.
The statement included seven themes that covered key areas namely the Omani media, the new media, training and rehabilitation of national cadres, the Omani media policy, the external media, the media attachés, private investments in media and the role of the Ministry in supporting civil society organisations.
At the beginning of the session, members of Majlis Al Shura congratulated the Public Authority for Radio and TV on the awards for the radio and TV.
On his part, Dr. Abdul Munim bin Mansour Al Hasani, Minister of Information announced organising a seminar on media and future in coordination with the Supreme Council for Planning next month. The seminar will cast light on the status of the Omani media.
The members of Majlis Al Shura continued their inquiries which focused on the importance of having a written clear strategy for the Omani media, a law on the new media and a smart media city at the coming and future stage. They also called for activating the media training centre established by the Royal Decree No.3/2018 as it plays an important role in rehabilitating and enhancing the media skills.
The session witnessed expanded discussions on the importance of enhancing and standardising the Omani national identity. Members of Majlis Al Shura questioned the role of Oman Establishment for Press, Publishing and Advertising on enhancing the Omani identity, especially in the border areas. They requested organising media awareness programmes that highlight the Omani identity and heritage.
They also requested benefiting from the media professionals in enhancing the historic heritage and national identity. In this regard, the Minister of Information pointed out that the ‘Omani identity ‘is one of the general principles on which the Omani media relies.
Members of Majlis Al Shura proposed to set up a specialist tourism channel that shed light and promote the tourist attractions in the Sultanate. The Minister of Information said that media industry is very costly and that we need at this stage to focus on priorities. The members also called for preparing cartoon films and programmes in light of the current changes and globalisation.
On the other hand, members of Majlis Al Shura cast light on the role of media in economic development pointing out that both of them integrate each other’s. They called for raising economic awareness of members of the society through the content provided to them. They urged for reconsidering the status of economic media to ensure that it keeps pace with modern changes.
Members of Majlis Al Shura highlighted the importance of having specialised media that analyses the different economic issues and problems. They pointed out that there is a lack of objective analysis of such issues. They highlighted the need to shed light on attracting foreign investments, promoting for the Sultanate as a tourist hub and spreading entrepreneurship culture.
The Minister of Information pointed out that the Ministry seeks to enhance the economic dosage through a number of TV and radio programmes on the Omani economy.
One of Majlis Al Shura members praised Economic Vision TV programme and stressed the need to handle the current situation with more in-depth analysis. -ONA
One of Majlis Al Shura members also stressed the importance of maintaining accuracy in spreading news and that the scoop should not prejudice the media credibility. The Minister affirmed that scoop may not prejudice credibility as credibility is the main characteristic of the official source of news.
Majlis Al Shura members also inquired about the role of media attachés and their standards.
As for availing local newspapers at the various governorates, the Minister of Information pointed out that coordination is maintained with Oman Air and civil Defence about delivering newspapers to all regions.
They spoke about providing suitable media space for the social phenomena that are affected by social networks. They urged the Ministry of Information to supervise e-media as well.
Majlis A’Shura members questioned the deterioration of Oman News Agency performance, in light of the content of the statement. They pointed out that Oman News Agency building needs renovation and that the Agency suffers from lack of qualified media cadres and poor resources.
The Minister of Information pointed out that there is an integrated file to develop Oman News Agency, which is the official source for news in the Sultanate.