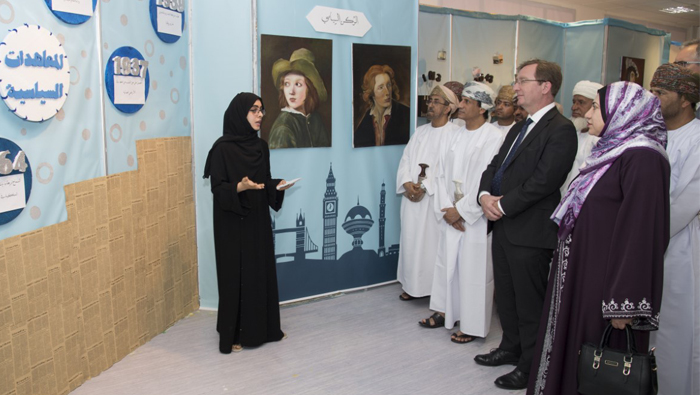 Muscat: Sultan Qaboos University (SQU) launched the “357 Years of Oman-United Kingdom Relations” exhibition under the patronage of Dr. Mohammed bin Awadh Al Hassan, Acting Undersecretary for Diplomatic Affairs at the Ministry of Foreign Affairs on Monday.
The exhibition is being organised by the History & Archeology Society at the Deanship of Student Affairs, in cooperation with the Political Science Group at the College of Economics & Political Science at the University.
The exhibition is being held at the exhibition hall at the Student Services Center from March 19 to 21, aims to attract students from various universities, private colleges, and schools to share the historical information, which links the two countries to the society in a modern and innovative way. The exhibition features a number of booths; the first booth introduces the group and clarifies the idea of the exhibition and its objectives.
The second booth (political relations) sheds light on the chronology of the historical relations between Oman and UK, and the economic booth discusses the most important economic activities between the two nations.
The “travellers and orientalists booth”, shares information on the British travelers and orientalists who visited the Sultanate.
The other two stations are the photography booth and the hospitality booth.