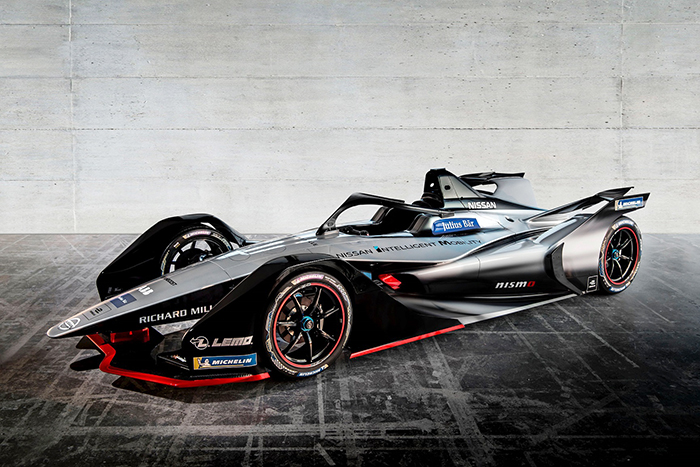 Nissan has taken the next steps toward its debut in the all-electric ABB FIA Formula E Championship by revealing its concept livery at the Geneva Motor Show. At last year’s Tokyo Motor Show, Nissan announced it would debut in Formula E from season five which is expected to begin in December 2018.
As part of the announcement, Nissan unveiled its colour scheme for the season five Formula E car, which features striking new aerodynamics and an entirely new battery and power train package.
The livery for Nissan’s Formula E programme was designed by Nissan’s Global Design team in Japan.
“At first glance the season five Formula E car looked to our design team like an EV-powered supersonic bird in flight,” said Alfonso Albaisa, senior vice president of global design at Nissan Motor Co., Ltd. “Naturally this initial reaction from the team started us on a path that captured a sense of a form breaking free of resistance and gravity. Formula E racers are virtually silent, with explosive speed bursts thus naturally we turned to Doppler when designing the livery. The combination of the sonic pulse of the Doppler effect and the released power of a sonic boom inspired our celebration of EV Racing.”
The new package provides more power, more range and eliminates the need for the mid-race car swap which has been used in the first four seasons of the championship.
While the new Nissan Formula E car livery was revealed for the first time, work has been underway on developing the all-new technical package for many months as Nissan prepares for its debut.