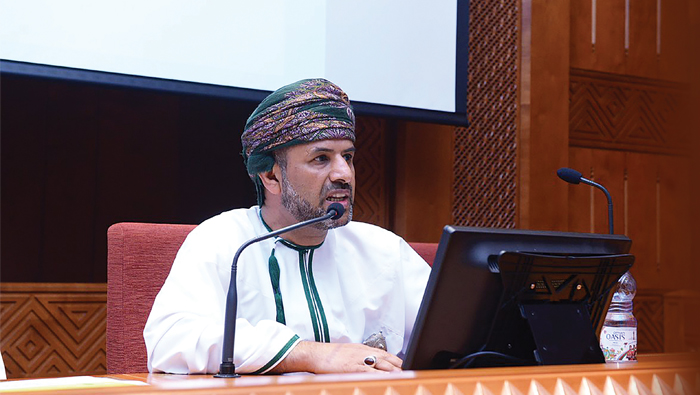 Muscat: The time has come for Oman to use innovation as a catalyst for change, The Research Council (TRC) stated during the unveiling of the National Innovation Strategy.
Highlighting a number of innovation-driven targets for the upcoming 22 years, TRC aims to make Oman one of the top 40 innovative countries in the world by 2020, and propel the nation into the top 20 by 2040.
Speaking during the event at TRC, His Highness Sayyid Dr. Fahd bin Al Julanda Al Said, Assistant Secretary General of the Innovation Development of TRC, said during the Q&A session: “Application is difficult. If we don’t change that, we will be responsible. We have not taught the value of work. This (strategy) has embedded teachings about the value of work.”
“When we talk about where we want to be in 2040, we are being far-sighted. But, we have to begin someday and the guidelines have to be there. We are not talking about problems without offering solutions. We are not dreaming for ourselves, but if we do not dream for the future generation today, then who will?” he asked.
The National Strategy for Innovation was launched with the theme “Oman Innovation Leap”, under the patronage of Sayyid Dr. Fahd, with Dr. Khalid bin Salem Al Saidi, Secretary General of the State Council; Dr. Hilal bin Ali Al Hinai, Secretary-General of TRC; and Dr. Sharifa bin Hamoud Al Harithiya, senior planning specialist at TRC and Head of the National Innovation Strategy Project in attendance.
In 2013, His Majesty Sultan Qaboos bin Said issued Royal decrees to set up the main committee for Oman Vision 2040 under the chair of His Highness Sayyid Haitham bin Tariq Al Said, Minister of Heritage and Culture. It developed and crystallised the draft document, while ensuring community-wide agreement and involvement.
In order for it to be used as a basic reference and manual for planning during the next two decades, Oman Vision 2040 has since continued to inspire and tie-into other developmental strategies including the National Innovation Strategy.
Looking for inspiration
In his opening speech during the event, Dr. Hilal said, “When we first started our research, we wanted to know why some countries succeed in developing strong knowledge-based societies and why do other countries fail. What we learned is that those successful countries, like Singapore and Finland, what they all have in common is a National Innovation Strategy.”
In his opening speech, Al Hinai said: “When we first started our research, we wanted to know why some countries succeed in developing strong knowledge-based societies and why other countries fail. What we learned is that successful countries, such as Singapore and Finland, have a national innovation strategy in common.”
“We are talking about innovation in general, not just technological innovation. We are talking about governmental innovation, innovation in education,” Al Harithiya said.
The new strategy outlined by her included a comprehensive vision with 10 focus areas, comprising Education and Training, Research and Development, Localisation of Knowledge and Technology, Production and Commodities, Knowledge Management, Information Readiness, Consulting Services, Local Marketing, Standardisation and Follow-up, and Harmonised Policies.
Road ahead
Senior officials at TRC acknowledged that while the goals were highly ambitious and challenging, the Sultanate was more than capable of achieving them.
According to TRC data, the top 20 most innovation-driven countries had an average institutional system ranking of 80 out of a possible 100, whereas Oman was ranked 71.8 last year. Subsequently, the top 20 last year ranked 50 for human resources and research, while Oman scored 35.8. The Sultanate’s infrastructure score was also almost a full 12 points behind the top 20’s 60, 15.6 behind the top 20’s 50 for technological output, and 24.8 behind the top 20’s 45 for creativity.
Al Harithiya concluded by saying that while the road ahead was far from simple, Oman’s ambitious vision was achievable. “Our vision, God willing, is to be among those nations that are leaders by raising the level of innovation in the Sultanate. Yes, to reach the 2020 goal, we have only two years left but we can do it,” she said.