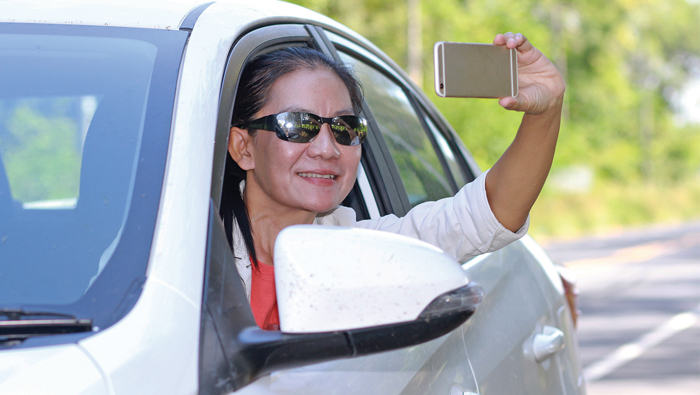 Muscat: Looking at a phone for two seconds while driving at a speed of 100km/hr is equivalent to driving blind for 60 metres, according to the Royal Oman Police (ROP), who have advised people not to take photos and videos of themselves and their surroundings while driving.
“There is a 23 per cent increase in chances of having an accident while using a mobile phone,” the ROP said, referring to the guidelines issued by the traffic department.
“The reaction time of a young adult while using a phone is equal to that of a 70-year-old man. If people use their phones while driving, they spend 10 per cent of their time off the designated route,” they added.
In the wake of the ROP arresting a driver on Monday evening after he posted a video of himself drifting dangerously, Ali Al Barwani of the Oman Road Safety Association has asked people to stop using their phones while driving. “The reason so many young people choose to do such things is because they believe they are Superman,” he told the Times of Oman.
“They don’t understand that they can suffer bad injuries or even death on the road. When they are involved in an accident, they are not just harming themselves, but their loved ones as well,” Al Barwani said.
“Imagine how sad their parents would feel because they have lost their loved ones. A person involved in an accident might be a father, whose family depends on him but will never get to see him again. This is very dangerous because drivers are not just causing harm to themselves and their families, but to other people on the road as well,” he added.
“On behalf of the Oman Road Safety Association, I ask all drivers to not throw away their lives like this, because for that one second of fame on social media, which will go away in no time at all, you are risking your life and the lives of others, and it is simply not worth it,” he noted.
Anuya Phule, a clinical psychologist and psychotherapist at Hatat Polyclinic, said some people enjoyed the danger of engaging in rash activities on the road.
“The habit that some people have of taking videos and selfies of themselves on the road is not just a psychological condition, but a neurological one as well. It means that although the brain is conditioned to think a certain way, this can be changed by following good habits over time,” she explained.
Dangerous activities
“People who often engage in such dangerous activities on the road are psychologically found to have qualities of self-love or attracting attention to oneself, and to meet this need or demand that they have, they may forget the danger of involving themselves in such activities,” she further said.
“Social media, in many ways, is about the attention you receive. Youngsters post such things so they can get attention. Despite the advice of their friends, parents, and well-wishers, teenagers, adolescents, and young adults choose to rebel against what is being told. If you want to take videos and photos, stop the car on the side of the road. Nothing is going to happen if you wait for a few seconds and delay your gratification,” Phule added.
She further remarked: “In addition, there is a lot of peer pressure on teenagers to fit in and look ‘cool’, even if it means resorting to dangerous situations. People might be scared of their friends rejecting them because they may not be thought of as being ‘brave’. They also think that although other people may have been in such accidents, they will not be affected but this is far from the truth. We, as parents and advisors, can only advise to a certain extent, but there need to be stronger laws to stop this from happening.”
Such cases of young people being caught filming while in their cars are unfortunately not new to Oman.
Last year, a young model was caught filming her dashboard while driving at an extremely high speed from Muscat to Dubai.
According to the handbook of facts and figures released by ROP and the Directorate General of Traffic, 4,721 accidents took place in the Sultanate in 2016, resulting in 692 deaths and 3,261 injuries.
Data from the National Centre for Statistics and Information read that 3,478 accidents took place from January to November 2017, an 18.4 per cent decrease compared to the same time period in the previous year.